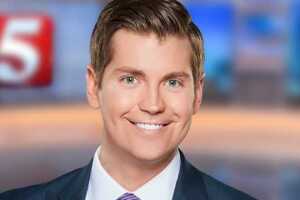 He’s from Athens, Georgia and married to Lauren. They are the proud parents of Kinney. Before moving to Nashville Adam was an anchor with NewsChannel 5's sister station KMGH in Denver, Colorado. Before that he was a morning anchor for NewsChannel 5's news partner WREG in Memphis.

Adam’s favorite thing about being a journalist is his ability to be involved in the community and make a positive difference. In 2013 Adam worked with lawmakers in Mississippi to create the Andrew Loyd Law in memory of an 11-year-old boy he covered as a reporter. Adam’s investigation revealed Andrew was negligently and inappropriately left in the care of his mentally ill father who took his life. The Andrew Loyd law now protects millions of children in Mississippi by adding another layer of protection when a parent or guardian is treated for mental health problems. Countless children could be saved by this law dedicated to honoring the legacy of a child who continues to have an impact on me and the entire community.

Veterans issues are also very important to Adam and he’s invested time serving on the board of directors for Alpha Omega Veterans Services in Memphis. Alpha Omega Veterans Services provides housing, food, counseling and rehabilitative services to homeless veterans in and around the city of Memphis. Adam volunteers in heading up all marketing and public relations efforts for the nonprofit organization that has helped more than 10,000 homeless veterans find employment and get back on their feet as productive members of society. It's important to Adam to give back to those who have given so much to us all.

Recognizing educators is also very important to Adam, and he’s spent time in elementary, middle and high schools each week recognizing teachers for their hard work and dedication. In 2010 I was honored by the Professional Association of Georgia Educators for outstanding coverage of educational issues.

Adam started his career as a reporter for WGXA in Macon, Georgia. While at WGXA he specialized in legal and political reporting. He also hosted a nightly call in show called the FOX Files where he would interview different guests on a variety of topics and took live questions on the air.

Adam enjoy being a journalist because it gives him an opportunity to explore with viewers the world they live in and how we can all make a difference in it. He also enjoys meeting viewers and being a part of community events!