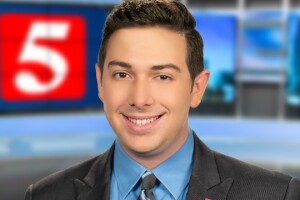 Max Sanders has a lifetime love of media. His parents were both broadcasters, one in radio and one in television. At NewsChannel 5, he creates video content for television and digital as Client Content Host and Producer.

A native of Tulsa, Oklahoma, Max joined NewsChannel 5 in April 2019. He knows the power of local media and its impact on communities first hand. He’s seen it his entire life.

That passion lead him to the Missouri School of Journalism. As a student, he gained invaluable experience at the university-owned NBC affiliate, KOMU 8 and Mid-Missouri CW. In 2016, he witnessed the Dallas community heal after police were ambushed and killed while interning at WFAA, Channel 8.

After graduation, Max joined the staff of educators and professionals at KOMU 8 and Mid-Missouri CW full-time. Game for anything, he’s done a bit of everything. Max is just as at home in front of the camera as he is behind it.

Max is now a resident of downtown Nashville and never tires of seeing the Batman building when he wakes up. When he’s not covering our region on the rise, you can find him listening to live music, enjoying some southern-fried comfort food, or doing karaoke at a downtown dive.

Max is proud to be part of the NewsChannel 5 family and would love to hear from you! Send him an email at max.sanders@newschannel5.com and connect with him on http://facebook.com/maxsandersnc5.