These states have been hit the hardest by America's opioid epidemic 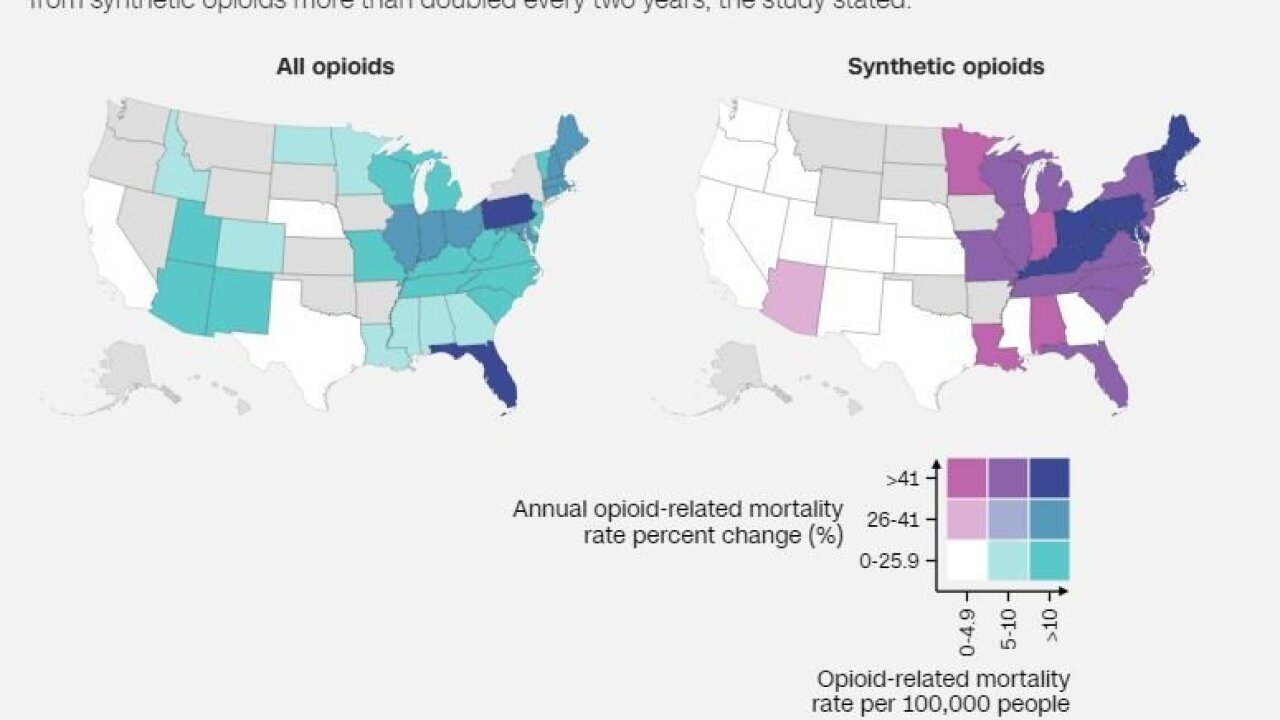 While there's early evidence that the explosive rate of opioid deaths has started to slow , opioids killed more than 49,000 people in the United States in 2017, according to preliminary data. A new study reveals which part of the country has been affected the most by the ongoing epidemic.

In a study of opioid deaths from 1999 to 2016, "we found that, in general, opioid mortality is skyrocketing," said Mathew Kiang , a postdoctoral research fellow at Stanford University's Center for Population Health Sciences .

More specifically, the study, published recently in the journal JAMA Network Open , found that the mortality rate from synthetic opioids in 28 states more than doubled every two years from 1999 to 2016. The District of Columbia saw the greatest increase in its opioid mortality rate, which more than tripled every year since 2013.

Fentanyl is up to 50 times more powerful than heroin, and just ¼ of a milligram can be deadly. For comparison, a standard low-dose aspirin is 81 mg. If you were to cut that tablet into 324 pieces, one of those pieces would equal ¼ milligram.

"One thing I do want to highlight is that, despite the large differences in deaths across states, there's no evidence to suggest that there's differences in use," Kiang said. "What we think is happening is that the heroin just continues to get more and more potent in the eastern United States, whereas heroin [in] the western United States has traditionally been this brown tar heroin. It's much harder to lace with fentanyl or other synthetic opioids."

At the national level, opioids were responsible for shaving 0.36 years off Americans' life expectancy in 2016, the study says. That's a greater loss of life than caused by guns or motor vehicle accidents.

New Hampshire and West Virginia saw the biggest drops in life expectancy, of more than a year, due to opioid deaths. Montana and Oregon were the only states to see a decline in opioid deaths from 1999 to 2016.

According to the report, "emerging research ... suggests the opioid epidemic has evolved as a series of 3 intertwined but distinct epidemics, or waves, based on the types of opioids associated with mortality":

Kiang said that, if anything, the number of opioid deaths is probably underreported because synthetic opioids require additional testing by a medical examiner. He hopes testing for synthetic opioids will become standard whenever the cause of someone's death is classified as an overdose.

Dr. Andrew Kolodny , the co-director of the Opioid Policy Research Collaborative at Brandeis University, said, "to talk about solutions, you have to frame the problem the right way." To him, that means looking at the opioid crisis not as an overdose epidemic but as an addiction epidemic.

Kiang agrees that there are multiple factors at work. "We need to make treatment at least as accessible, available and affordable as heroin," he said. "It shouldn't be harder to get help than it is to get heroin."