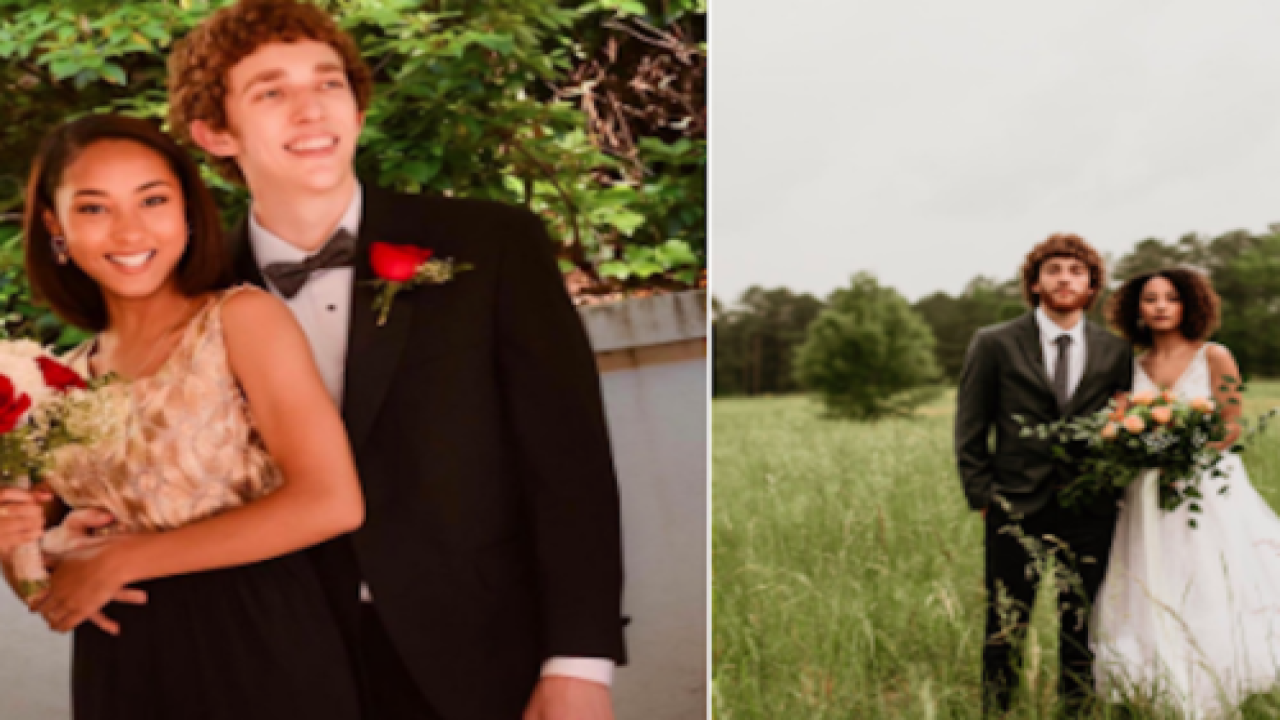 What started as a way to commemorate how far Sydnie and Bailey Haag had come as a couple — they went to prom together in high school and now they’re married — has now turned into a viral sensation.

Recent newlywed, Sydnie Haag had no idea that her photo-sharing would spark so much commentary, much less prompt other couples to follow suit, but sometimes the internet has a way of surprising us.

“I was looking back at old photos and thinking how different my husband looked and how young we looked,” Haag told “Good Morning America.” “I posted it on Twitter and didn’t think much of it.”

This is the sweet tweet that started it all:

In fact, some comments even had Haag posting additional wedding pictures to prove that the two were happy about their wedding experience:

Since y’all think we aren’t happy or didn’t smile our ENTIRE WEDDING DAY bc of ONE pic ð pic.twitter.com/Rvd8MOR6Ey

Other couples who have been together since high school began to share similar photos, and to think that so many couples had their romantic stories begin in high school is pretty incredible.

Twitter user @ShayShayIX was inspired to show the difference between 2013 and 2019:

These images from Twitter user @b_hardyrenee couldn’t be sweeter:

Especially once you learn that the couple is now expecting a baby:

And now we gonna have a baby any day now ð­ðð½♥ï¸ pic.twitter.com/n12FS3kJdU

This one, from @cassidywrap, shows her and her husband as childhood best friends, prom dates, and new parents. Aww.

Here’s another such story from @BAILEE_29, whose prom and wedding pictures happened a year or so apart:

Yep, this post has definitely started a great thing. Here’s a response from @gR33DYgENIUS:

Haag told “Good Morning America” she was happy to see that her tweet had started this conversation online.

“It made me feel happy because I’m the type of person that likes looking at pictures and looking at people’s stories,” she said. “It’s nice to see where people started and see where they ended up.”

We couldn’t agree more! And for anyone who enjoys a good old-fashioned happy ending, this isn’t the first time tales of true love shared over social media have overwhelmed us.

Back in 2017, people took to Twitter to tell stories of how their parents met, and the tweets will have you crying happy tears!

That trend started with a simple tweet from Twitter user @Nicole_Cliffe asking, “How did your parents meet?”

My dad got on the wrong bus and saw my mom, proceeded to keep taking the wrong bus for months to work up the courage to talk to her.

Or how about this quick story, from @nicole_soojung, in which her response is everything:

introduced by mutual friends at a bar; Dad was the designated driver; joked that he'd only drive my mom if he got her number, omg Dad

This one from @elanpin is pretty amusing:

And these wonderful stories are just a few out of thousands!

What can we say? People on the internet love love, including us. Bring on more romantic origin stories!

Related stories
Copyright 2020 Scripps Media, Inc. All rights reserved. This material may not be published, broadcast, rewritten, or redistributed.