Country music icon Merle Haggard has passed away on his birthday at the age of 79.

Those closest to Haggard said he passed Wednesday morning surrounded by family and friends.

His son, Ben Haggard, said on social media his father told them he would pass on his birthday.

A week ago dad told us he was gonna pass on his birthday, and he wasn't wrong. A hour ago he took his last breath...

In December, Haggard was hospitalized due to pneumonia, and in February, he canceled shows in California and Nevada due to health issues caused by the pneumonia in both lungs.

Then in March, Haggard had to cancel shows at the Ryman in Nashville due to illness. Those shows had been rescheduled for September. Ryman officials said those tickets would be refunded at the point of purchase.

The singer of hits like "Okie From Muskogee," “Mama Tried," and "Workin' Man Blues" had a battle with lung cancer in 2008. He still kept up an ambitious touring schedule.

The guitar player Haggard recorded many of his hits with is Reggie Young, who lives in Franklin and spoke to NewsChannel 5 about his friend's death.

"The most popular country singer ever. Period," Young said of Haggard. "I don't know anybody that could replace him."

Young said that recording songs with Haggard for over 30 years was a special opportunity, and he was able to learn about the meaning of the songs from the man himself.

"Before we cut a song, he'd take the lyrics and read the lyrics real slow, so we would understand what the song was about," Young explained.

Country music legend Charlie Daniels called Haggard one of a kind who impacted generations of musicians and fans.

Daniels added that Haggard's distinct voice and lyrics helped make him a legend.

"He spoke and wrote and sang in a language everyone understood," said Daniels.  "When he said something, there was no abstract.  You didn’t have to scratch your head.  You knew what he was talking about."

After his passing, friends and fans flooded social media with their memories and condolences.

We lost one of the greatest singer/songwriters since Hank Williams. Inspiration to millions, great American, thank you Merle. I'll miss you.

Heaven's band just got better! RIP to the LEGENDARY @merlehaggard. Your music will never die!

Love and prayers for the Haggard family. Merle was a pioneer...a true entertainer...a legend. There will never be another like him.

There are no words to describe the loss & sorrow felt within all of music with the passing of Merle Haggard. Thank God for his life & songs.

Rest in peace, Hag. One of a kind, and the definition of legend. pic.twitter.com/aUGX22Avna

We've lost a giant. No words for what @merlehaggard's music meant to me. I know his mind is now untangled forever. https://t.co/UpW6mzp1pK

I just told my little girl @merlehaggard has passed away and gone to heaven. She said, "that's okay daddy,We will get to go to heaven too.

RIP Merle...you paved the way for so many. You had what we all hope for...a voice that matters and survives the ever changing trends.

Sad to hear of Merle Haggard's passing. Country music would not be what it is today without his contributions.

extremely sad to hear of the passing of one of the greatest of all time Mr. Merle Haggard... https://t.co/hmAlAdA8pl pic.twitter.com/s9VhxkXz57

It felt like the world stopped for a moment when I heard about Merle Haggard...such an icon...thanks for your gift to all of us brother

A true hero was lost today. Thank you for your contribution to not only country music but all music. @merlehaggard

Haggard has won just about every music award in addition to 40 number one hits.

In March, Haggard's hit "Mama Tried" was selected for preservation in the National Recording Registry. 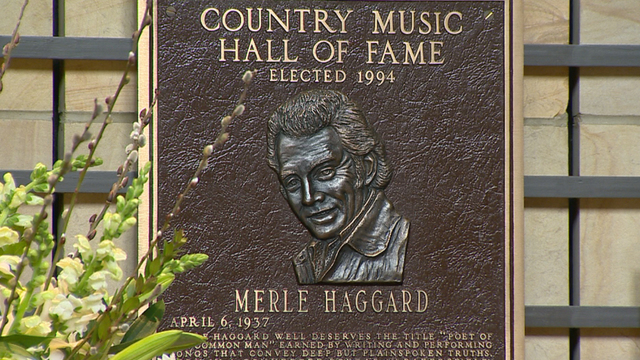 Kyle Young, CEO of the Country Music Hall of Fame and Museum, released the following statement on Haggard's passing:

"Merle Haggard’s contribution to American popular music is inestimable, and his death seems somehow unfathomable. He carried the sounds and spirit of his heroes Jimmie Rodgers, Bob Wills, Lefty Frizzell, Hank Williams, and Woody Guthrie into the present day, and he wrote the songs that told, and will continue to tell, our stories. He sought to make, in his words, 'music that contributes to the well-being of the spirit… music that cradles people’s lives and makes things a little easier.' That music remains with us, to soften the enormous blow of this hard and sad time."

Those with the Ryman released the following statement:

"We are terribly saddened to hear about the passing of our friend Merle Haggard earlier this morning. Merle’s legacy and boundless influence have been felt by many generations. We’ve been honored to host him on our stage countless times and are grateful for the memories he’s given music lovers in our pews.  Our thoughts are with Merle’s family and entire team on this heartbreaking day."