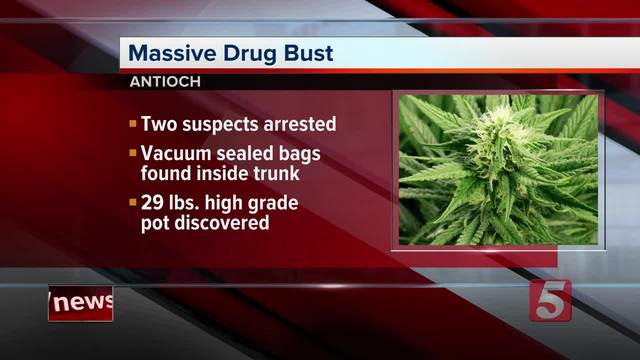 Metro Nashville police arrested a man accused in a drug operation that led to the discovery of a large amount of marijuana.

Metro Nashville police arrested a man accused in a drug operation that led to the discovery of a large amount of marijuana.

Investigators said they were conducting surveillance at a home on Melpar Drive in South Nashville in mid-February. They were watching for parcel deliveries at a home between Madeline Drive and Yorktown Road.

According to arrest documents, investigators observed Nesuan Ibrahim receiving a package from a carrier service and carrying it into his carport. They later witnessed Ibrahim putting another box into the trunk of the vehicle. The vehicle was driven away by another man.

They pulled the vehicle over for a traffic stop, which included the use of a K-9 officer. That K-9 conducted a "free air sniff" and indicated to his partner there were drugs in the vehicle.

During a search of the vehicle, officers recovered 29 pounds worth of what they describe as high-grade marijuana. The arrest report said the marijuana was located inside duffel bags and suitcases, along with the box officers reported seeing Ibrahim load into the vehicle. The man who was driving the vehicle, Shinvar Abdullatif, was arrested and charged with a felony drug offense immediately after the traffic stop.

Ibrahim was arrested Tuesday morning and charged with a felony drug offense. He posted bond and was released from jail within an hour of being booked.