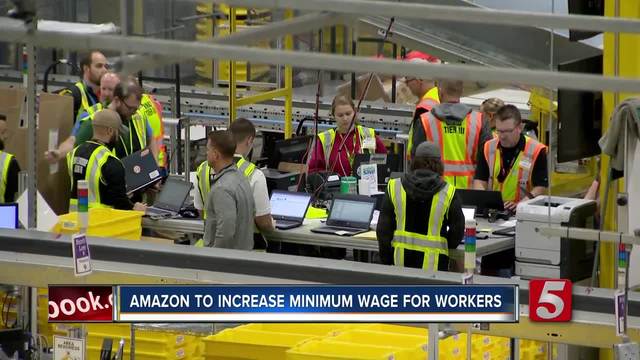 Amazon workers are expected to see a pay increase to at least $15 per hour next month after the e-commerce company announced a nationwide minimum wage increase for their workers.

Amazon workers are expected to see a pay increase to at least $15 per hour next month after the e-commerce company announced a nationwide minimum wage increase for their workers.

"In New York city, $15 per hour is not much, in rural Tennessee, $15 per hour is a pretty good paying job," Andrew Borchers, a business professor at Lipscomb University, said, adding that the labor market is heating up and Amazon likely did the move to secure holiday workers and stay on top of the industry. "I think the others will be forced to follow along."

While the change will have an impact on 350,000 workers all around the country, it will also have a big impact in Tennessee.

"All those distribution centers you see out around 840, they employ a lot of people down at that $10-12 an hour range," Borchers said.

While some big companies like Costco have already promised an increase to $15 an hour, others will likely follow along, but the increase could pose a problem for local companies trying to compete for workers.

Regardless, Borchers said the increase is necessary in Middle Tennessee with Nashville growing so rapidly.

"With rising housing costs, we need to see wages go up, because we begin to see a gap here where the cost of housing pushes people out of the labor force in this area," Borchers said. "I'm hopeful for the working poor that this actually has a positive impact."

The change will impact workers at Whole Foods as well, which Amazon recently acquired.