Barricaded Suspect In Custody After Standoff At Nashville Apartments

An hours-long standoff has come to an end after a suspect surrendered to authorities at an apartment complex in Nashville.

An hours-long standoff has come to an end after a suspect surrendered to authorities at an apartment complex in Nashville.

The incident was reported around 7 a.m. Wednesday in the 100 block of Charles E. Davis Boulevard at the Tony Sudekum Apartments.

Officials with Metro Police said a domestic situation escalated and 29-year-old Justin Jones fired shots at the ground with his wife and 11-year-old child nearby.

The incident was captured on the complex's surveillance video.

Metro Police Spokesman Don Aaron said Jones was near a dumpster when he began "cranking off shots" with his daughter to his right.

Another shot was fired while police were setting up a perimeter around the apartment.

"We heard all the shootings, the vibrations through the door, through the walls my kids are screaming going craz," said next-door neighbor Chancey Merrell.

Since her home is right beside Jones' officers had to come inside the home to secure the area and them inside. "We had to wait for the special units to come to even let us out of the house," she said.

Officer Gerry Hutcheson was struck in the shoulder but Aaron said the wound was “non-penetrative.” He was wearing a bullet proof vest.

Officer Hutcheson was taken to an area hospital to be evaluated and was later released.

The suspect also allegedly shot at a SWAT team member, at which point an officer possibly returned fire. During a press conference held around noon, Aaron said he could not confirm if any officers fired their weapons. 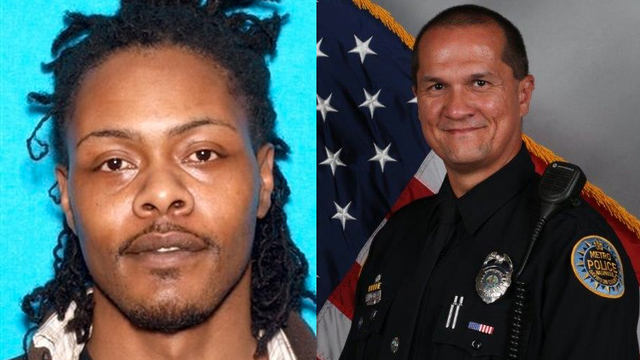 The last interaction Jones had with police was around 9:35 a.m. when the last shot was allegedly fired.

Residents in one unit had to shelter-in-place due to their close proximity to the apartment.

Gunman Justin Jones in custody without incident. He surrendered to SWAT. pic.twitter.com/bEO8J02q12

After more than three hours, police deployed a robot inside the apartment and set off a distraction device - a loud bang - to see if they could detect any movement. At that time, Jones surrendered without incident.

Aaron said warrants have been issued, charging him with felony aggravated assault for firing the gun near his daughter. A federal warrant could be issued later.

Police said Jones has felony robbery convictions in Tennessee and Ohio. He was not a resident of the complex and it's not clear at this time why he was there.

Jones had been paroled on robbery charges in Ohio in December 2016. He was supposed to be on supervised release in Mississippi until 2021.

Representatives with the U.S. Department of Justice were on scene, as were officials from the District Attorney's Office and ATF.

Police said a woman claiming to be Jones’ sister was also arrested for disorderly conduct at the scene.

Three schools in the area were also placed on lockdown, including Johnson Alternative Learning Center, Cameron College Prep and Napier Elementary. Those schools were cleared to dismiss at normal time.