Bill To Ban Sale Of Liquor To DUI Offenders 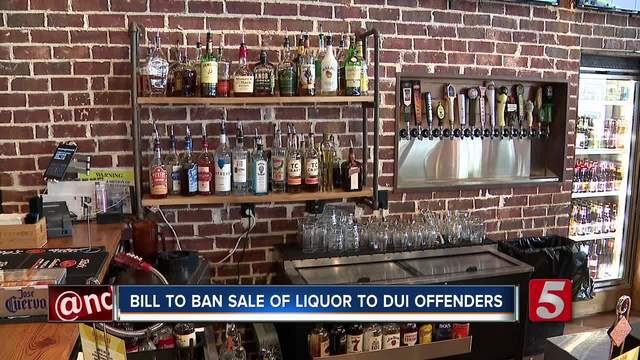 A bill moving through legislature has aimed to prohibit DUI offenders from buying alcohol, but some have questioned if it will actually solve the problem.

A bill moving through legislature has aimed to prohibit DUI offenders from buying alcohol, but some have questioned if it will actually solve the problem.

It would give judges the power to forbid people convicted of driving under the influence to purchase liquor.

Offenders would not be able to order a drink at a restaurant, purchase alcohol at a liquor store or in a gas station.

It passed through the Tennessee House on Wednesday.

Judges would be able to use their discretion on whether first and second time DUI offenders would be prohibited from purchasing alcohol for one or two years.

The bill would also make the purchase of liquor by a DUI offender a misdemeanor.

One local restaurant owner said his business has its own policies in place that would lower the chances of someone getting behind the wheel over the legal limit.

"When you see somebody that's starting to catch a buzz, and they might cause danger, they are cut off immediately. That's what we want to do, we want to keep everyone safe, we don't want any responsibility on our hands either," said Chris Sartin, Soul Shine Pizza, Founder.

Law makers were originally hoping to have the ban in HB 1698 to be a lifetime punishment, as well as penalize store owners or workers for selling alcohol to DUI offenders. Those have been removed in an amendment.