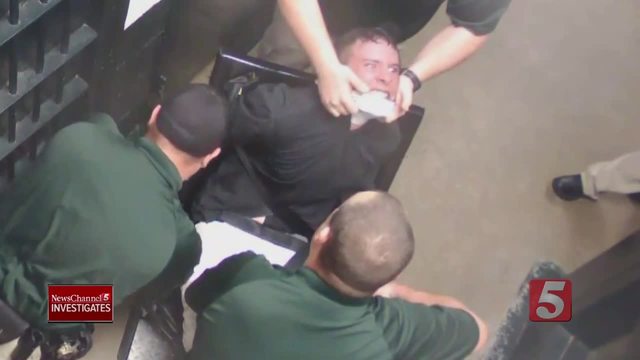 Agents with the Tennessee Bureau of Investigation began investigating Mark Bryant on Aug. 3, shortly after NewsChannel 5 investigates broke the story of surveillance video showing the inmate being tased.

The incident happened in early November.

Cheatham County's Use of Force Report indicated Norris began "banging his head against the door" of his cell and was threatening other inmates.

The TBI's investigation showed that while being restrained in the chair, the inmate was able to loosen one arm, that's when Bryant used a stun gun on the inmate at least four times, one of the stuns lasting about 25 seconds.

On Tuesday, the Cheatham County Grand Jury returned indictments charging Bryant with four counts of Aggravated Assault and one count of Official Misconduct.

On Wednesday, authorities arrested him and booked him into the Cheatham County Jail on $75,000 bond. The investigation into the incident remains active and ongoing.

“The Cheatham County Grand Jury returned an indictment against Mark Bryant.  As Sheriff I am saddened this happened within our jail. We have taken all necessary steps to prevent this from happening again. On my watch, excessive force will never be tolerated.”

“Cheatham countians have been so supportive of their sheriff’s office and it’s dedicated employees. A terrible mistake was made and has been addressed. Because of this, we have become better servants. We will always do our best to protect all citizens including inmates in our facility.”