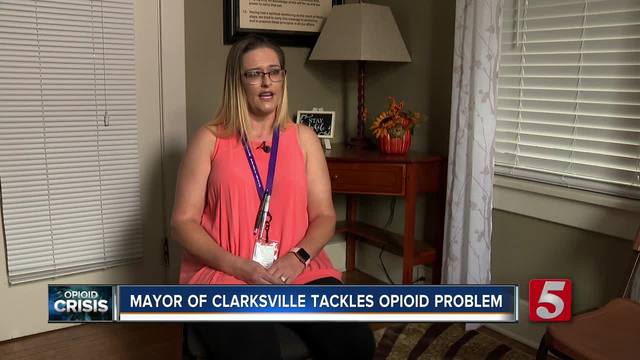 Clarksville Mayor Kim McMillan is forming an Opioid Task Force to help the city develop a coordinated response to the ongoing crisis.

Clarksville Mayor Kim McMillan is forming an Opioid Task Force to help the city develop a coordinated response to the ongoing crisis.

The plan for the group is to find long-term solutions to reduce opioid abuse, dependence and overdoses.

"I felt it would be important to form a citizens task force who were interested in looking at ways that we could address this opioid crisis," said Mayor Kim McMillan, City of Clarksville.

"When you get hooked on opioids and you try to get off you get really sick, physically ill. In order to feel normal I would have to have opioids," said Coon.

Coon was addicted to drugs for 20 years, but she's been sober for 3-and-a-half years and now works at Buffalo Valley. The same facility who helped her to recovery.

It's success stories like these, the Mayors office hopes to continue with her opioid task force.

The task force is made up of veteran outreach leaders, health professionals and city leaders.

It's expected to grow to about nine members over the next few weeks. The following people have already committed to serve:

No heroin overdose deaths occurred in Montgomery County in 2016, while two were recorded in 2015. (2017 data was not yet available.)

The task force will meet once a month for the first six months. It will have its first meeting on September 12.