As people find ways to safely get out of the house during COVID-19, conservationists worry the added crowds are putting stress on Tennessee's natural areas. 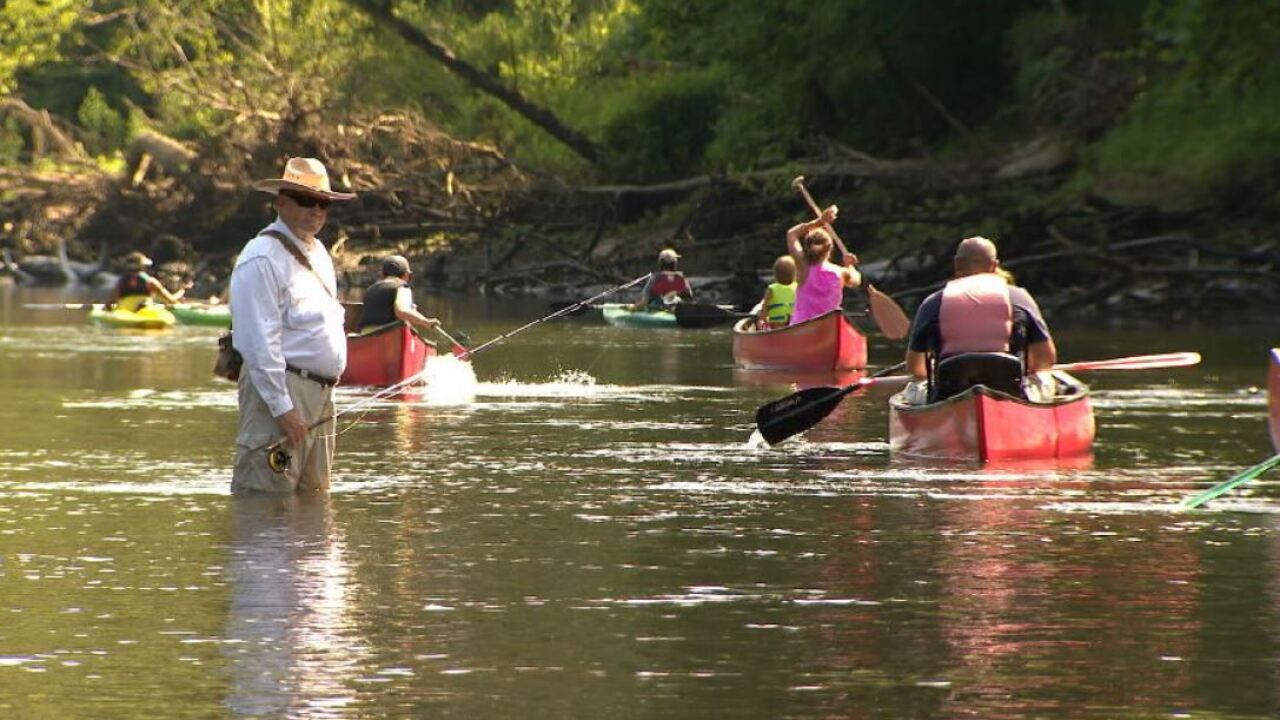 DEKLAB COUNTY, Tenn. (WTVF) — As people find ways to safely get out of the house during COVID-19, conservationists worry the added crowds are putting stress on Tennessee's natural areas.

One of those concerned conservationists is Chris Nischan, who works as a fishing guide and has been on DeKalb County's Caney Fork River for decades.

"I started the fishing the Caney Fork when I was 15 years old, and I'm 57 now," Nischan said, while fly fishing Friday morning.

Fog was still coming off of the water when Nischan said he had already been out on the river for about an hour and a half.

"There's just something, something very special about it," he said in between casts.

Part of that "something special" is the trout that fill the river, attracting fly fisherman from across the state.

"We have three species of trout up here: rainbow, brook trout and brown trout," Nischan said.

While he cast, he kept an eye upstream. As a group of a dozen canoes and kayaks came into view around a bend in the river, Nischan checked his watch.

Nischan said that's the time he usually runs into the first groups of canoes and kayaks that have been dropped off by commercial rental operations that have set up shop around the Caney Fork River.

Nischan said the growing groups can number in the dozens, telling a story about how over the Fourth of July weekend he tried to count the number of canoes and kayaks coming down the river in one group but stopped at 79.

"They come in waves," he explained.

"When you get 30 to 40 trying to come through, even if the river is bank to bank, you just stand there and let them go," Nischan said, adding that sometimes even when the waves are gone, you can still see marks left by the guests.

"I pick up trash constantly," he said. "When the river gets back in shape, it will be as good as many blue-ribbon trout streams that I've fished all throughout the country, but what good will that do?"

Nischan said he loves seeing people enjoy the river that holds a special place in his heart, but worries what the crowds could mean for the waterway's future.

"Getting people outdoors is, to me, being an outdoors person and a hunter and a fisherman with two daughters, is the greatest enjoyment," Nischan said. "But everything has a breaking point, and I won't say break, but it is bending hard, and I think it's not fair for one user group to have sway over another one."

"This season is unusually busy," Billie Davis said. The Chief Operating Officer of Canoe the Caney, the largest rental company near the Caney Fork River, estimated the company has seen a 30 percent increase in customers compared to last season.

While talking outside of the company's building in DeKalb County building, Davis explained that many customers say they are searching for safe ways to get out of the house as COVID-19 continues to spread.

"It's something people can do, they can get outside, they can enjoy nature," Davis said. "People want to go outdoors with everything going on."

But Davis doesn't see those crowds as a bad thing. She said the customers bring tax money and jobs to a traditionally rural area. She also noted that recreational opportunities on the Caney Fork River are featured on the Tennessee Department of Tourist Development's website and are cited as an important source of revenue for some surrounding cities.

"We draw a lot of tourism into this region," Davis said. "We're one of the areas that they are concerned about as far as being a distressed area, so bringing people into a distressed area, that's one of Governor Lee's main agenda items."

"This is not a new issue, but overcrowding has seemingly increased substantially this year," Michael Butler said, also attributing that increase to the spread of COVID-19.

"It's time to start a management plan process," Butler said.

Butler said a 'comprehensive management plan' created by state leaders could outline how different groups could balance uses of the river.

"This is nothing new, there are a lot of rivers in the United States that get this level or greater of use and they've figured out how to manage those rivers so each group can have its place on the river," Butler said, citing Missouri's Current River as an example of a waterway with a "use plan."

"Our goal is that every user of the river have a chance to have a quality experience because these are public waters," Butler said.

Nischan has ideas of his own for how to ensure a quality experience for everybody.

"I said how about a dollar or two dollar launch fee," Nischan explained. "In my opinion, if you are going to make money off a public resource, you ought to be willing to put in."

Nischan said fee money could go toward the upkeep of public boat ramps and to hire TWRA agents to patrol the river. Right now commercial rental businesses have to get permits through the TWRA, but are not required to pay any fees.

But retailers argued added fees or requirements would be an added burden on the fast-growing industry.

"It would be drastic," Davis said when asked about the proposals. "We employ a lot of people, and if you cut the business down it would cut the people that we need down."

"It's a statewide issue"

While the Tennessee Wildlife Federation is focusing efforts on the Caney Fork, leaders say the issue goes beyond the river's banks.

"This is not just a Caney Fork issue, it's a statewide issue," Butler said, adding that recreational areas across the country are dealing with a sharp increase in visitors, especially as COVID-19 continues to spread.

"When you put that many people on the water and you don't have a process of how you manage that, you don't have facilities in place to deal with waste or garbage or litter, then the overall quality of the desirability of that area will suffer long-term," Butler said.