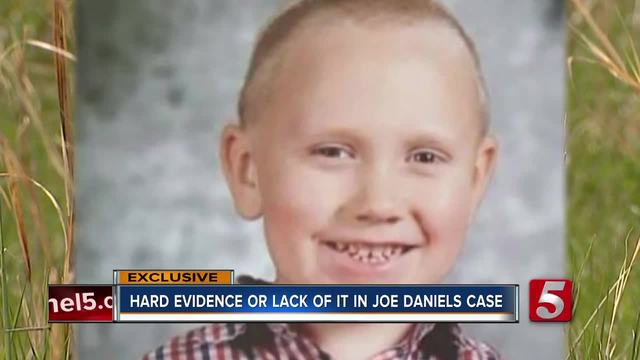 NewsChannel 5 has learned new details about the lack of evidence in the Joe Clyde Daniels case.

The pressure is building: a homicide confession but no body. Now it's just weeks before the parents of 5-year-old Joe Clyde Daniels face a judge and the question remains as to whether the charges will stick.

There are new details about the evidence or lack of it in this high-profile case. Yes, there is a confession.

We know more than a month after the little boy disappeared, his remains still have not been found.

"[It’s going to] be a tough case without a body," said attorney Jim Todd who has closely followed the high-profile case.

He says yes – you can convict someone without a body. But the question is what other proof is there that a crime was even committed?

“Here they are going to have to prove he's dead because he's not here," said Todd.

Joe Clyde is indeed gone but what happened?

NewsChannel 5 has learned at this stage of the investigation there is little other physical evidence to prove Joe Clyde is dead.

With a key court appearance just weeks away, the father's confession remains critical to the case.

"If he denies it and there's no evidence then it is a very circumstantial case,” said Todd.

Some of Joe Daniels' family members think he was coerced into making the confession.

So, it's possible the public defender will at least try to challenge the validity of that confession in court.

"The defense attorney will move to have the statement thrown out. If they are unsuccessful then the defendant has to testify and say even though I said I did it… I didn't do it," said Todd.

The X-factor in all this: What did Joe Clyde's mother Krystal see the night of the alleged homicide?

She is charged with failure to protect, so investigators believe she witnessed something.

Could she testify against her husband?

So, what evidence do prosecutors really have in this case? We'll learn much more when the parents have their preliminary hearing on June 1.

Both Joseph and Krystal Daniels remain in the Dickson County Jail one $1 million bond each.