Beshear urges Kentuckians to change up routines to avoid COVID-19 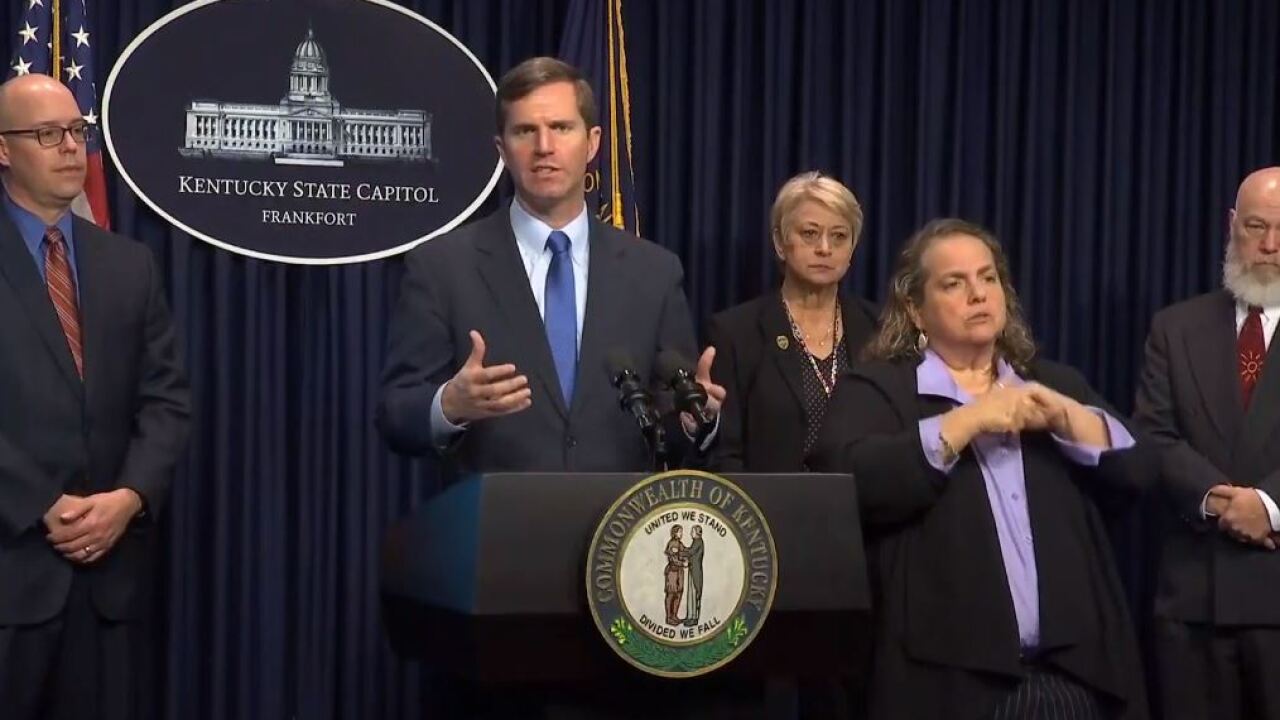 On Wednesday, Governor Andy Beshear announced more steps to stop the spread of the new coronavirus.

"We know this is community spread and we think it's very important to get ahead of it," said Beshear. “It is important for everybody out there to be calm, practice good hygiene and reduce the risk of exposure for themselves and others.”

Earlier this week, Kentucky's public health commissioner said most people who get the coronavirus will be fine.

"For 80% or more of people who get infected, you're going to be just fine," said Dr. Steven Stack. "You'll probably either have cold symptoms or no symptoms. So for 80% or more people, the current data says, you will be fine."

However, health officials worry the elderly and those with health issues could face a problem. As a result, the governor is asking all Kentuckians to practice social distancing. That means give yourself some extra space and avoid large crowds - including those at church. The governor asked places of worship to temporarily cancel services - at least through the weekend.

"I wouldn't recommend it if I did not believe it was necessary," said Beshear. "Especially if you look at our churches, we do have high senior populations in them."

Beshear acknowledged that this is a big step and knows some people will disagree with it. However, he is pushing for it because many of the attendees are members of high-risk populations and churches put people in close proximity to one another.

“I believe God gives us wisdom to protect each other and we should do that. I believe that it is our job to offer those protections,” said Beshear.

The governor also announced changes being made to state prisons. Visitors are temporarily not being allowed inside.

"This is a step that other states are taking and we believe given the confined space, it is necessary," said Beshear.

Prisoners will be given other ways to communicate with loved ones.

"We are going to provide them with a free phone call each week - and up to two, I believe, contacts through a controlled social media source," said Mary Noble, the Secretary of the Justice and Public Safety Cabinet. "It's not the same as seeing them in the flesh - we know that. But it is a good option."

School districts are also being instructed to be prepared to close on short notice.

"That could be as short as 72 hours, and while we are not there yet, it is very possible that in the future, we will ask schools in Kentucky to close down for a period of time," said Beshear.

As of Wednesday morning, Kentucky has eight confirmed cases of the new coronavirus. There are five cases in Harrison County, two in Fayette and one in Jefferson. The governor says the five cases in Harrison County have connections between them. All eight people are in isolation, four in medical facilities and four at home. The governor says they are all doing better.

"All eight, to our knowledge, are stable, are doing well, and a couple of these individuals may almost be through this," said Beshear. "That is very, very good news."

The Centers for Disease Control and Prevention say to protect yourself from the new coronavirus, the flu, and other respiratory illness: