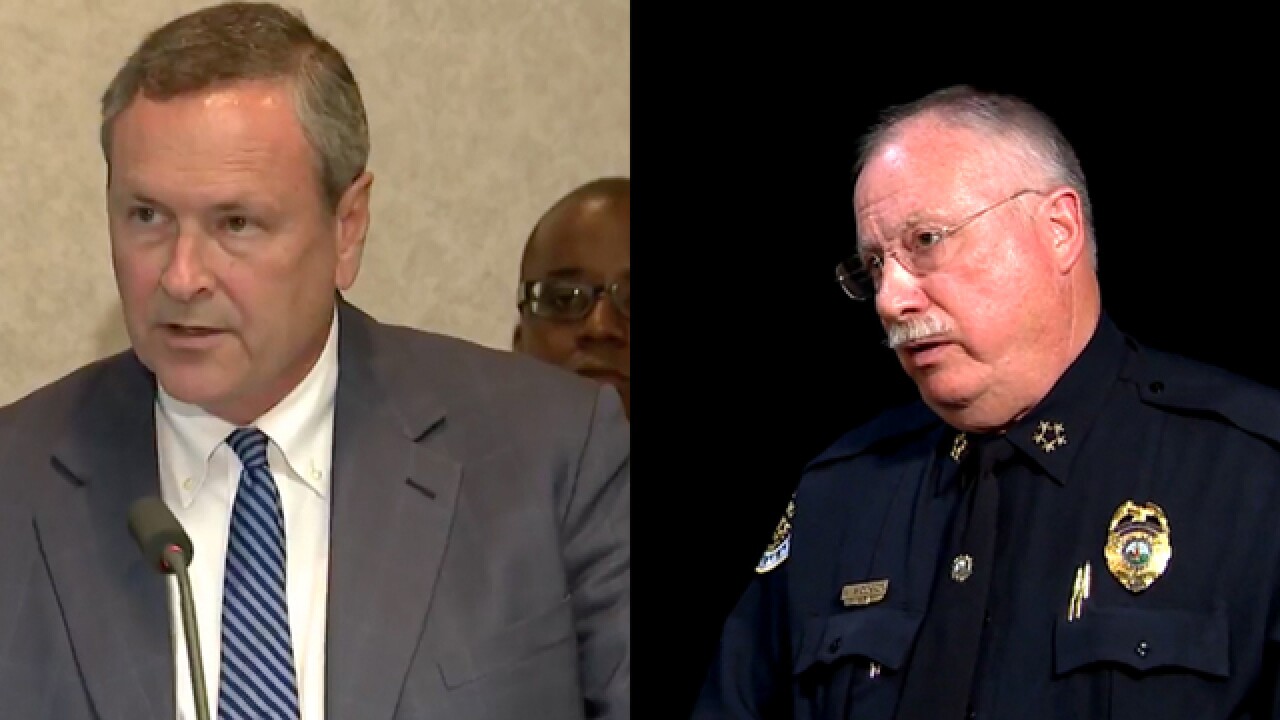 Metro Police Chief Steve Anderson and District Attorney Glenn Funk continued to publicly spar on Tuesday as both departments continued to dig in their heels - once again exposing differences in how Nashville's top law enforcement officials believe officer involved shootings should be handled.

Yet, during a press conference last week, District Attorney Glenn Funk's office publicly blasted Metro Police for their handling of the investigation, saying that their were multiple instances where there could have been "perceived bias," on behalf of Metro Police.

It said repeatedly that she misstated the facts, and has made no effort to correct her error.

Funk responded by forwarded the email, and his reaction to Mayor Megan Barry. "Chief Anderson has responded to our suggestions for improving MNPD policy on terminology with personal attacks on the Deputy DA ," Glenn Funk wrote in a strongly worded email to Nashville Mayor Megan Barry.

"As the Chief Law Enforcement officer in Davidson County, I am concerned whenever people in the Nashville community can perceive bias in the justice system," Funk continued.

On Tuesday, Metro Nashville Police appeared to publicly push back against the District Attorney's Office following a separate officer involved shooting in Antioch. The shooting involved three MNPD officers who opened fire on a man allegedly assaulting his wife and 15-year-old daughter. After the shooting, District Attorney Funk's office requested the Tennessee Bureau of Investigation be sent to the scene to conduct their own investigation. But Metro Nashville Police told the TBI their services were not needed because the shooting was not a fatal.

A Memorandum of Understanding between the District Attorney, Metro Police and the TBI states the TBI will only involve itself in an officer involved shooting if that shooting is fatal.

Here's an update on our involvement in this morning's incident in Antioch involving @MNPDNashville. pic.twitter.com/jqDOFhwctB

Both incidents highlight the clear division that remains between Metro Police Chief Steve Anderson and District Attorney Glenn Funk. Several sources tell NewsChannel 5 that many Metro Police Officers feel as though the District Attorney's Office has used the opportunity to cast them in a negative light with the public.

"It’s never a good thing when the district attorney and chief of police are at odds with one another. [If you're a police officer] putting on a bullet proof vest every day and you’ve got worry about, does the DA’s office think I’m a bigot?" he added.

“I will be meeting with General Funk and Chief Anderson to discuss their ongoing concerns about how we best instill confidence in all parts of our criminal justice system - from best practices for policing to how our DA and police work together to ensure trust and transparency. We will work through differences and we will take any steps necessary to move forward. The public and the men and women of MNPD deserve no less."