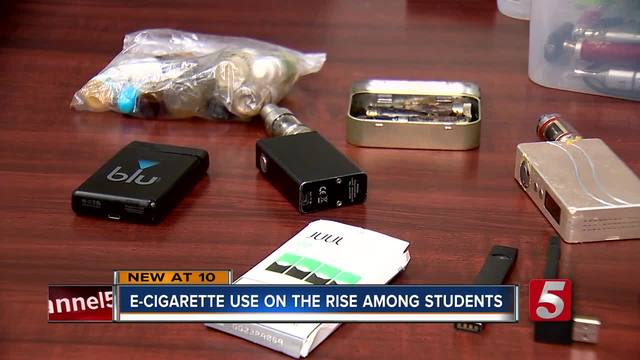 Electronic cigarette use is on the rise in Cheatham County schools, but officials are working to crack down on the problem.

Electronic cigarette use is on the rise among teens, putting local schools on the front line in fighting what the FDA has called an epidemic.

So far this school year, Cheatham County school officials report 16 students have been cited for vaping.  A total of 30 citations were given out during the last school year.  Sgt. Chris Gilmore said often times e-cigarettes go undetected by teachers and parents.

“It’s easy to conceal, it has a fresh fruity smell and some e-cigarettes don’t smell at all,” said Sgt. Gilmore, a SRO for Cheatham County Schools.

Sgt. Gilmore said if students are caught using e-cigarettes in school, they will be issued a citation that comes with a $74 fine.

E-cigarettes are often marketed to minors as a safer alternative to traditional cigarettes.  However, Dr. Michelle Fiscus, a Pediatrician, said the devices do come with health risks.

“They can get a very powerful hit of nicotine off the device,” said Dr. Fiscus.  “They can develop quick addictions.”

One of the most popular forms of e-cigarettes is known as a Juul.  It is small, inexpensive, and looks like a USB drive.

Sgt. Gilmore said the school district is working to teach parents and teachers on how to spot the devices.  He said education is key to reversing the trend.