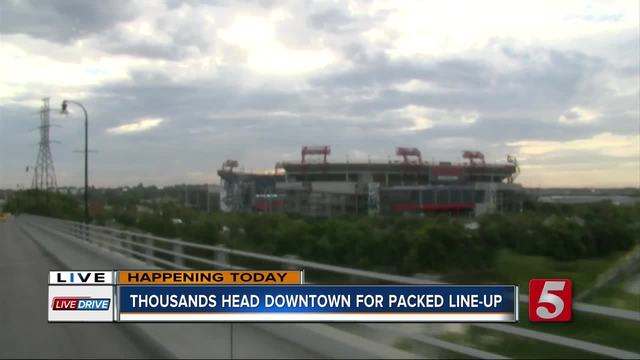 Downtown Nashville is expected to be busy Thursday ahead of a Tennessee Titans game and a couple of big music events.

Downtown Nashville is expected to be busy Thursday ahead of a Tennessee Titans game and a couple of big music events.

The Titans are set to take on the Minnesota Vikings at 7 p.m. at Nissan Stadium. Michael W. Smith is performing at Bridgestone Arena at that same time, while Live On The Green gets underway at 6 p.m.

Anyone headed to or from downtown should expect major traffic congestion – especially around Nissan Stadium and the Historic Courthouse.

Metro Nashville Police said westbound lanes of the Woodland Street Bridge will close to traffic at 5:30 p.m. Eastbound lanes will remain open throughout the night.

Commuters should also expect delays on eastbound James Robertson Parkway. As an alternate route to the interstate, drivers can take 3rd Avenue North to MetroCenter.

Titans fans who normally park in state employee lots will not have access to them until 5 p.m. Gates to Nissan Stadium open at 5 p.m.

Stadium parking lots open at 3 p.m. to fans with parking passes. If you don’t have a parking pass, you can park downtown or ride a shuttle bus.

Here are more options for getting around town: