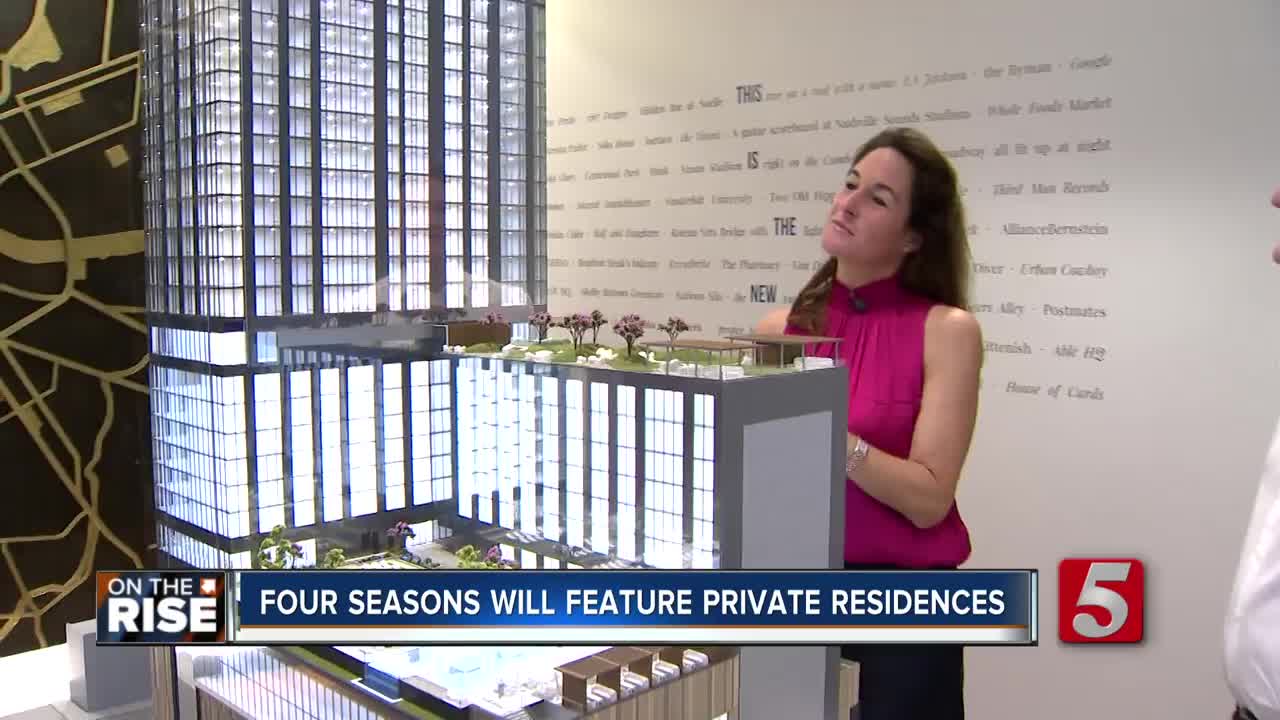 The Four Seasons is well known for its hotels, but many properties also house private residences. That will be the case at the Four Seasons Nashville, where interested parties can already inquire about buying a residence in the future tower. NASHVILLE, Tenn. (WTVF) — The Four Seasons is well known for its hotels, but many properties also house private residences. That will be the case at the Four Seasons Nashville, where interested parties can already inquire about buying a residence in the future tower.

Developers broke ground on Four Seasons Nashville last year near the downtown pedestrian bridge. The building will be 40 stories tall with 230 hotel rooms occupying the lower floors with 143 private residences in the tower.

While the rooms themselves are expected to be impressive, one of the many reasons people may choose to purchase a private residence in a Four Seasons is for the accommodations they get.

“One thing about owning in a building like this is it’s not just your walls, the experience opens up," said Marie-Laure Frere, director of sales at Four Seasons Private Residences Nashville. “Whether it’s afternoons by the pool, walks on the sky garden, going to your dedicated fitness center, enjoying the restaurants, and room service.”

Frere said that the service by employees and the relationships they form with residence owners sets them apart.

“The average doorman at a Four Seasons is with us 27 years," Frere explained, adding that all staff learn resident's habits and likes over time. “They know exactly what wine you want, they know how you like your cup of coffee.”

When it comes to who is inquiring about the Four Seasons Private Residences Nashville, Frere said there's appeal across the country. “Obviously, we’re pulling a lot from New York and Los Angeles. There’s an inherent music industry, there’s a financial industry here, businesses are moving here.”

But Frere said she was interested to find out that the majority of people inquiring are from Nashville.

“It’s people that are in downtown that have said, you know, Marie-Laure, I really want this life. I’ve stayed at a Four Seasons, my friend owns at a Four Seasons, I know it’s Nashville’s turn, I want to experience it," Frere explained, adding that many who live in the suburbs of Nashville are also reaching out. “The children are gone, our lives are changing, it’s a new phase for us, and we really want to own in a place where it is completely managed. We can close the door behind us, come and go as we want, and have a staff that understands us.”

While those interested are able to visit the Four Seasons Private Residences Nashville sales gallery and talk with Frere about owning in the hotel, they aren't officially selling the units yet. That's expected to happen next month, but the hope is to sell all of the units before the project is complete.

At the sales gallery, you can see a model of the hotel, see a digital image of what the view looks like from every residence, see a model unit, and get more information on Four Seasons Private Residences living.

The Four Seasons Private Residences Nashville sales gallery is by appointment only through their website.