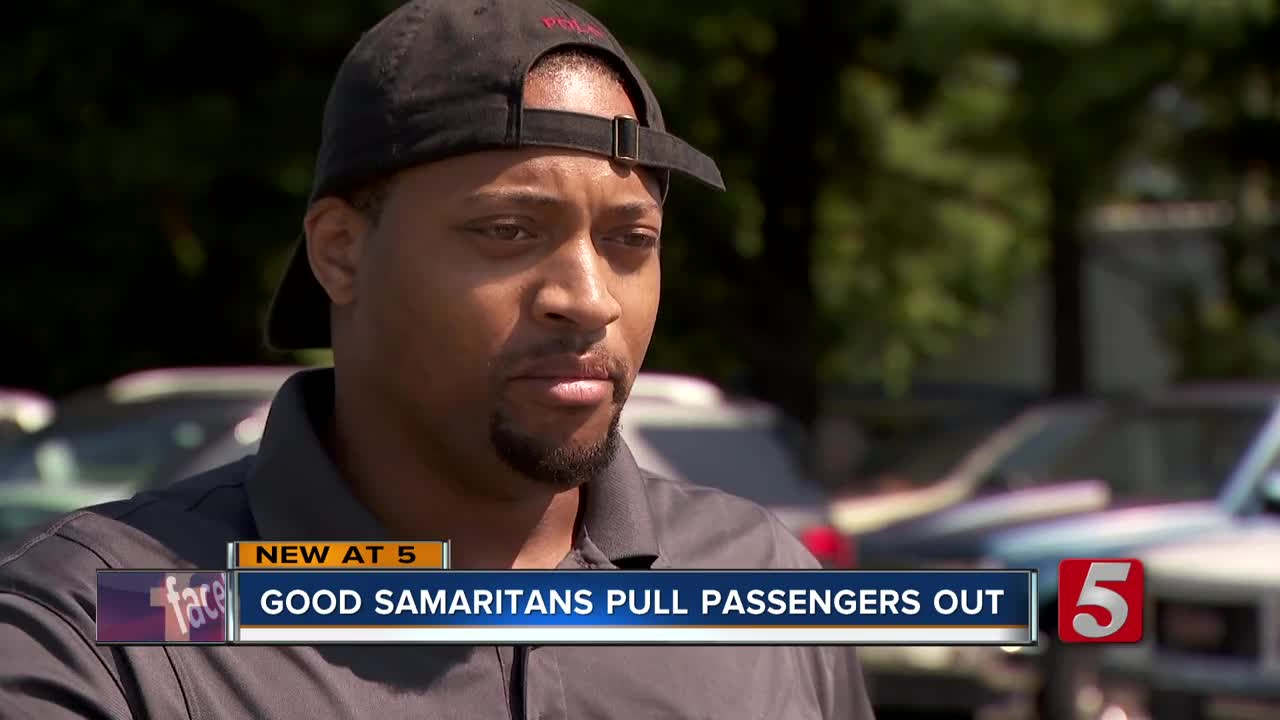 A group of Good Samaritans rescued a mother and daughter from their SUV after a hit-and-run crash in Nashville.

NASHVILLE, Tenn. (WTVF) — A group of strangers sprung into action to rescue a mother and her young daughter from their burning SUV after a rollover in Old Hickory.

The collision happened at around 7 a.m. on Wednesday in front of Mitchell Auto Sales on Robinson Road near Old Hickory Boulevard.

Officials with the Metro Nashville Police Department said the SUV was struck by a white car and then rolled three or four times before coming to rest on its side.

Baret Buckland told NewsChannel 5 that he saw the vehicle flip over before he rushed to the driver side door and heard the child in the backseat crying.

Meanwhile, Elijah Blacksmith also rushed to the scene with other bystanders and smashed the back window to help get the daughter out.

"I was just really concerned about getting everybody out," Blacksmith said. "I kicked it with my foot and I basically fell over into the car with my hand stuck on the side of the window."

Blacksmith showed NewsChannel 5 the bandages wrapped around his left hand. After he kicked in the back window, Buckland was able to get the little girl out and comfort her.

"I pushed the roof of the car up a little bit so the little girl can sneak up the back seat. I wanted to take care of the kid until the mother can come back and console her herself, telling her it's ok and will be safe," Buckland recalled.

The moment the lady was pulled out of the passenger side door as it was smoking was caught on cell phone video from a witness across the street. Witnesses say the vehicle caught on fire moments later.

Both men agreed that their actions were nothing heroic, just human.

"You just got to help people, if you're in that position you want somebody else to come help you too," Buckland said.

Both mother and daughter were taken to TriStar Skyline Medical Center. Neither of them was seriously hurt.

Police say they are still searching for the hit-and-run driver. Right now, there’s not a specific description of the vehicle.