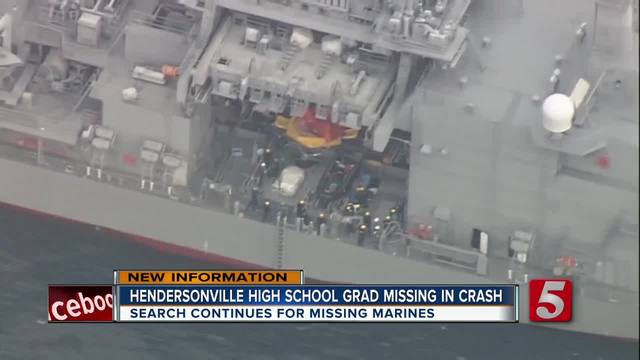 A Hendersonville Marine remains missing after a mid-air collision off the coast of Japan last week, according to a report.

The U.S. military has declared a Hendersonville marine dead after a mid-air collision off the coast of Japan last week.

Carter Ross was among the seven marines involved in an incident between two aircraft about 200 miles off the coast of Japan.

Early Tuesday morning, the military said it stopped search and recovery operations for the five missing crew members. The following day, the U.S. Marines identified all of the victims.

In memory of the Marines from VMGR-152 and VMFA(AW)-242 with @IIIMEF who lost their lives in an aircraft mishap. Semper Fidelis, Marines. pic.twitter.com/SQjSXKdc1M

Ross is a 2015 graduate of Hendersonville High School.

The two planes -- a KC-130 and F/A-18 -- collided at 1:42 a.m. local time about 200 miles (320 kilometers) off the coast of Japan during an aerial refueling that was part of routine training, according to the statement. The primary mission of a KC-130 is airborne refueling.

The cause of the crash remains under investigation.

CNN reported that one Marine was rescued and was "in fair condition."

Friends set up a GoFundMe page* identifying Ross as one of the men involved in the collision. On the page, a friend described Ross as "one of the silliest and most compassionate people you will ever meet."