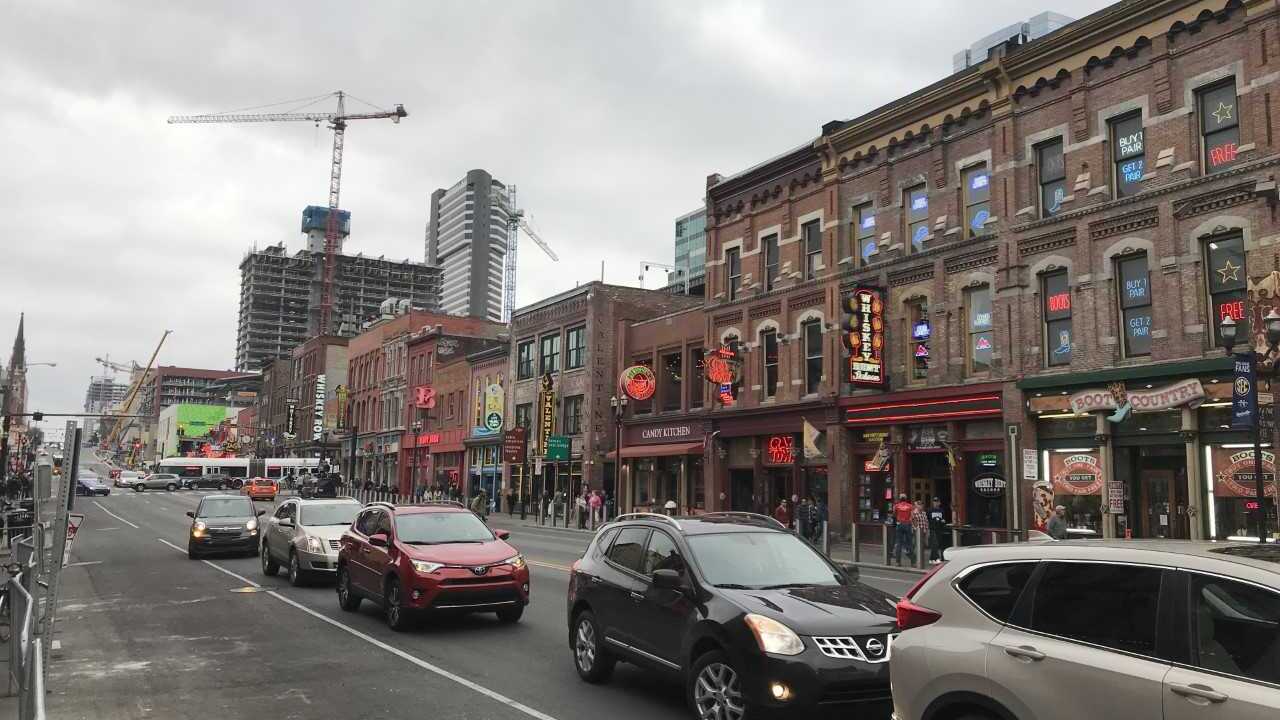 The 2019 Nashville Nine, nominated by members of the community, will be the focus of Historic Nashville's advocacy and outreach throughout the coming year.

"By listing these nine properties, we are underscoring the ongoing threat to our city's most valuable historic places," said Elizabeth Elkins, vice president of Historic Nashville and chair of the Nashville Nine Committee. "Whether it be through development, bad politics or neglect, each of these nine properties is at risk. As we all watch our city change at an extraordinarily rapid and unprecedented pace, I hope that every Nashvillian considers the impact these potential losses have on the character of our environment. The loss of the past will undoubtedly be a huge factor in our city's futue."

Known since the 1980s as The Rock Block for a pair of clubs that sit across the street from each other, the two-block strip serves as an entertainment district for students at Vanderbilt University, as well as a proving ground for local musicians.

The nearby Elliston Place Soda Shop is listed on the National Register of Historic Places, serving as a fixture in the neighborhood since 1939. The Exit/In and The End - established in 1971 and 1990 respectively - have long served as launching pads for the careers of Steve Martin, Jimmy Buffett, Barefoot Jerry, John Hiatt and Kings of Leon.

Successfully staved off by the community earlier this year was a rezoning exemption here, which would have allowed a 15-story hotel to be erected on the site of three apartment buildings in the area. Still, development continues to invade the historic Rock Block, as every block surrounding it has seen recent construction. The Rock Block still looks largely the same.

Between West Nashville and Percy Warner Park is Belle Meade, an area of Davidson County once the home of a plantation and horse farm. From the 1920s through the 1950s, hundreds of landmark homes were built in a variety of architectural styles.

Many of these homes survive to this day, but development pressures in the area have led to a record number of demolitions in recent years.

Community input has brought attention to the teardowns, and designs proposed by builders who sacrifice quality for profit.

The City of Belle Meade has started a process to establish a conservation overlay to protect the area's historic character. This would mean all requests for demolitions and new construction there would be subject to review by the Historic Zoning Commission.

Founded in 1855 and located two and a half miles southest of Nashville City Center, Mount Olivet Cemetery was added to the National Register of Historic Places in 2005. Four structures on the property are named as contributing to the cemetery's eligibility for the National Register. The earliest of the four to contribute is the Vault, which was built between 1856 and 1862.

The Vault, once leased by the Sons of Confederate Veterans for use as a museum, is now empty. Because of safety concerns, it has been closed to the public by Service Corporation International/Dignity Memorial, which bought the cemetery in 2014.

Mount Olivet's local management has started working with preservationists to develop a plan to restore and maintain the structure.

Burrus Hall is located in the National Register Historic District at Fisk University, and was built in 1945. It was named in honor of James and John Burrus, who were two of the first four graduates there in 1875.

Throughout the history of the building, it was used as the music building, a men's dormitory and 12 faculty apartments.

In 1978, Burrus Hall was damaged from two arson-related fires. The building was most recently renovated in 1992. As of 2009, windows in the easternmost section of the north wing are boarded up and the entrance doors show signs of damage. Vegetation is growing around the property. Portions of the cornice on the west and south elevations are missing.

Across the street from Burrus Hall is the Boyd House, another historic building on campus showing disrepair. The Metro Historical Commission says they've been told the Boyd House will soon be demolished. Concern that Burrus Hall may also be demolished is exacerbated by the fact that the building doesn't appear to have had extensive use for over the past decade.

The Home for Aged Masons and the nearby Boy's School both appeared on the first Nashville Nine list in 2009. Ten years later, the century-old properties continue to deteriorate due to neglect.

The Home for Aged Masons - built between 1913 and 1915 - has been listed on the National Register of Historic Places since 2008. The Home and Boy's School are the only two buildings surviving from a larger complex dating back to the early 1900s.

Tennessee purchased the Home in 1941 to use it as a tuberculosis hospital. The property has been vacated since the 1990s. The Metro Historical Commission and a group of Metro council members and state representatives managed to delay the two buildings' demolition, but nothing has been done to restore them. Historic Nashville says they encourage the city's new administration to find adaptive reuse for the pair of buildings.

Buildings that are not easily identified as historic, but are significant to Nashville's history, have become opportunities for redevelopment in the two-for-one, four-for-one or more trend. Post-World War II suburbs, especially mid-century and minimal traditional housing types, are at risk of being lost as developers surmise potential for greater density housing.

Some of these neighborhoods have the potential to become designated historic districts, but tall and skinny homes threaten their historic context.

Further, the demolition and redevelopment of these houses reduce the amount of affordable housing in Nashville, a city already struggling to meet demands for affordable housing. The trend for increased density development can be seen in Hillwood, Donelson, Inglewood, Green Hills and more.

Downtown Nashville is a historically significant area of the Music City, with four National Register Historic Districts, as well as a number of individually listed or eligible National Register Properties, that are daily threatened as growth in Nashville encourages high-density redevelopment.

Nashville grew from the early Fort Nashborough settlement into a commercial hub in the late 1800s, with many historic buildings still found downtown. These buildings define Nashville's character, but are between two and six stories. This makes them targets for redevelopments.

While Downtown Code has some height restrictions, it does not necessarily protect historic buildings, as there is some flexibility in the restrictions' interpretations. Also, only a few historic buildings are protected by Historic Zoning Overlays. Because of this, added height allowances and outright demolition threaten what is left of the character found in Downtown Nashville.

This neoclassical building is located in the Historic Black Business District downtown. The National Baptist Convention built the building in the mid-1920s for the Sunday School Publishing Board, serving the largest African American religious denomination in the world.

The building is named after Reverend E.C. Morris, president of the National Baptist Convention during the time of planning.

The Morris Memorial Building was listed on the Nashville Nine in 2016 for the threat of redevelopment, but there was hope on the horizon when the city announced intent to purchase and preserve the building. That hope was lost when the administration abandoned the purchase proposal. As a result, the building is still threatened by redevelopment.

The Nashville branch of the Federal Reserve Bank of Atlanta was completed in 1922.

The building was constructed as response to the city's growth as a financial center and was located in the city's Wall Street area. The Federal Reserve occupied the building until 1958 when it moved to a new building on Eighth Avenue North. The building was added to the National Register of Historic Places in 1984, and was sold to Nashville-based entrepreneur and owner of the Johnny Cash Museum, Bill Miller, in 2018.

Plans for the building have not been disclosed, but Historic Nashville says there are talks of expanding the building for hotel use, adding height to the building. Such an expansion could cause the building to no longer be considered as contributing to the National Register-listed Historic Financial District, compromising its historic integrity.