How Eating Too Much Halloween Candy Can Impact Kids' Health 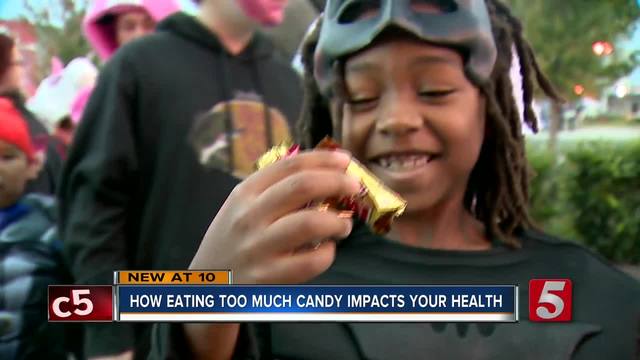 The trick or treating and Halloween fun may be over but the candy left behind could last for days, weeks or longer.

The trick or treating and Halloween fun may be over but the candy left behind could last for days, weeks or longer.

Dr. Rachel Mehr is a family medicine physician with Saint Thomas. She also has a 5 and 7-year-old at home and knows what so many parents are dealing with after Halloween. “In our house sometimes they can get so much candy it can last for months,” said Mehr.

Which is why she says its important to make sure your kids don't get too much sugar. “It then effects their sleep and their mood,” Mehr said.

Those who eat to much candy may miss meals, leaving them malnourished. Statistics show it also leads to increased absenteeism rates at school and at work.

For kids, eating candy and sugar day after day can set them up for a lifetime of health problems. “That’s when we really see the insulin levels spike, the excess sugar being stored as fat,” explained Mehr.

However, no warning may be as dire as this one, stay away from large amounts of black licorice. “That’s one of the ones we could actually overdose on that could actually be lethal,” said Mehr.

It has to do with a specific ingredient found in the licorice root. “The potassium level can fall to a point where it can cause heart arrhythmias and other heart problems that might actually lead to heart failure,” Mehr said.

Otherwise, most candy is fine in healthy portions but if you happen to notice serious symptoms such as chest pain or extreme lethargy in you or you kids, Mehr advices to head to the ER.