I-40 Bridge Repairs Set For This Weekend In Nashville

If you plan to hit the road this weekend near downtown, interstate construction could slow you down.

If you plan to hit the road this weekend near downtown, interstate construction could slow you down.

The work will begin Friday at 8 p.m. and will end Monday at 6 a.m. Tennessee Department of Transportation crews were forced to make repairs after a large truck damaged the bridge back in April.

TDOT said crews will close the I-65 ramp to I-40 West and all northbound traffic will be diverted. The I-40 East ramp over I-65 North at the same location will be reduced to one lane. 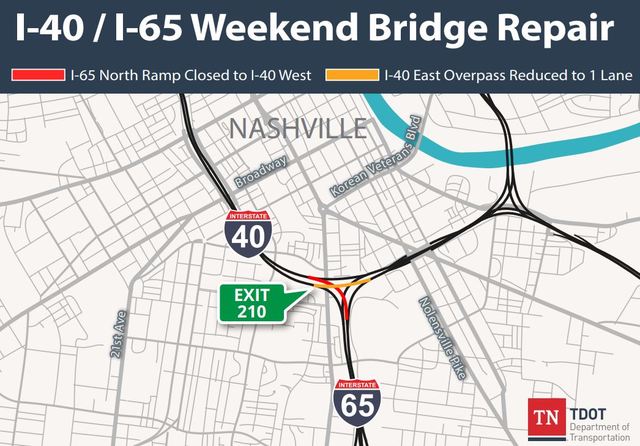 The initial crash closed a portion of Interstate 40 and I-65 for nearly 20 hours. A semi carrying a construction tanker didn't clear the bridge and became wedged between the overpass and roadway.

TDOT’s chief engineer estimated it will cost hundreds of thousands of dollars to fix.