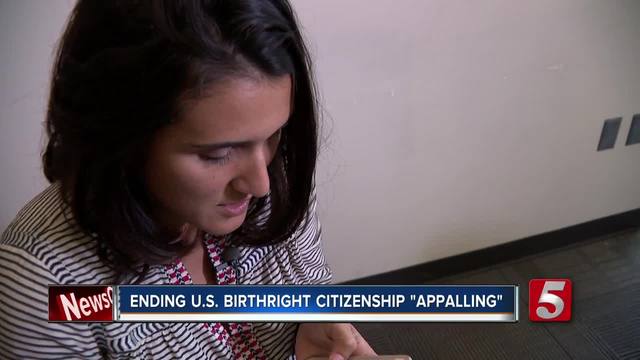 The possibility of President Donald Trump claiming to end citizenship for U.S. born babies of illegal immigrant parents has some locals in the community outraged.

The possibility of President Donald Trump claiming to end citizenship for U.S. born babies of illegal immigrant parents has some locals in the community outraged.

Lisa Sherman-Nikolaus with Tennessee Immigrant and Refugee Rights Coalition woke up to several messages on her phone about the President's decision.

As an immigration rights advocate, she said this is a big distraction ahead of the Midterm elections.

"[President Trump] is trying to get people again riled up with fear and anxiety and hatred towards immigration populations so that they would be moved to vote at the polls," Sherman-Nikolaus said.

"The text of the 14th Amendment is pretty clear, it's really just a matter of when this provision gets interpreted by the Supreme Court, what does this Supreme Court think," said Russo.

"Obviously there would be a major outrage for many supporters of foreign nationals in the United States and at that point they're U.S. citizens, so it's almost like depriving someone of their U.S. citizenship," he said.

"I think one of the reasons the president might do this as an executive order because as we know Congress is unlikely to act on many issues but I specifically don't think that Congress has the intention to take away birthright citizenship," Russo said.

Lawmakers on both sides of the aisle have expressed concern over the issuing executive order, including Republican House Speaker Paul Ryan.