Sky 5 flew over the scene where Mt. Juliet police are searching for suspects who burglarized a gun store early Wednesday morning.

One of the 5 suspects believed to be responsible for a burglary at a Mt. Juliet gun store, an 18-year-old male, has been arrested.

Officers arrested 18-year-old Malik Bradford Wednesday morning. He confessed to his involvement in the burglary and told police a total of five people were involved, which was new information considering they'd only been searching for four.

Bradford was one of the suspects that ran from police during a traffic stop after the burglary. The stop was recorded and posted to YouTube.

Officers said they believed a burglary call that came in Wednesday morning at a home on Curd Road was related to the four suspects.

Police set up a perimeter around that home, but said no one was found inside. Authorities then searched a nearby wooded area with the help of K-9 officers; however, nothing was found.

The home is located about half a mile from the store where the burglary took place. Police said they had believed the suspects were anywhere on the northeast end of Mt. Juliet near Woodridge Place, Curd Road and Golden Bear Gateway to Division Street.

This home is only about a mile from the burglarized gun store, officers are searching the area with riffles. @nc5 pic.twitter.com/rjnxC83JbE

Just before noon Wednesday, officials said they were discontinuing the search for the four suspects adding they no longer believed they were in that area.

Authorities said 17 of 19 stolen firearms had been recovered. Two handguns remained unaccounted for.

Officials with Mt. Juliet police said the men used a stolen Volvo out of Nashville to smash their way into the store and ransack the business.

When officers arrived on the scene, they found glass scattered throughout the parking lot and street. The front of the business was also heavily damaged.

A witness later reported seeing two suspicious vehicles parked on Parrish Hill. The individuals were spotted unloading items from one car into a Chevrolet Caprice.

Not long after, police saw the car traveling on Lebanon Road and stopped it on Park Glen Drive. The men inside got out and fled into a wooded area. 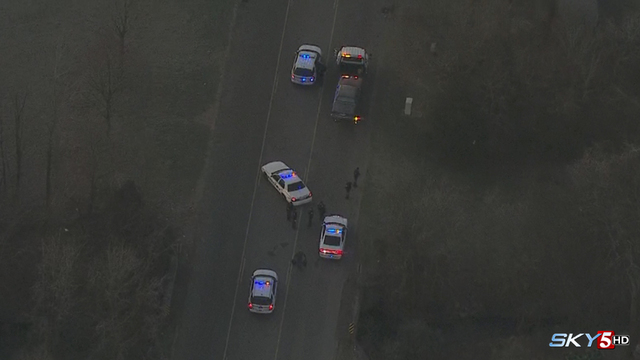 It's unknown how many weapons were stolen from the store, but the suspects reportedly left many behind in the car when they fled the traffic stop.

They were described by police as being three black men with a thin build. A fourth suspect was not seen by officers but was captured on surveillance video.

Lt. Tyler Chandler said residents should not be alarmed but should remain vigilant throughout the morning.

Do not leave your car running to warm it up. That makes it a prime target for theft. Keep doors locked on home. Report suspicious activity.

Students at Mt. Juliet Middle and High Schools, Elzie Patton and West Elementary were placed on a soft lockdown until the all clear was given – meaning exterior doors will be locked, with no recess or outside sports practice.

Just after noon Wednesday, those with Wilson County Schools said the soft lockdown had been lifted.