The 4-year-old girl who was allegedly kidnapped from her Florida home and found in Tennessee was reunited with her family.

Rebecca Lewis was allegedly taken over the weekend by an estranged family friend, West Hogs. The pair was located in Memphis Monday.

Hogs' court date was set for 8:30 a.m. Wednesday. The 31-year-old was arrested when his vehicle was spotted and pulled over around noon.

Memphis Police released photos of young Rebecca after she was taken into custody. 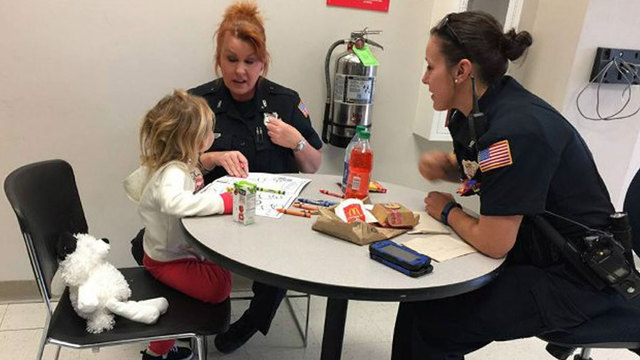 On the morning of her disappearance, a 16-year-old sister told authorities she saw Rebecca sleeping about 9 a.m. but when she woke up again 45 minutes later, she was gone.

A multi-state manhunt ensued, with sightings of the pair being reported in Georgia and Tennessee.

Officials with the Polk County Sheriff's Office in Florida said a man and child matching their description were spotted in East Tennessee. The sheriff's office asked the Tennessee Bureau of Investigation to issue and Amber Alert.

However, according to the TBI the sighting was not confirmed; therefore they did not issue a state-wide alert until they received confirmation that Hogs used his credit card in Nashville at a convenience store on Antioch Pike at Interstate 24.

In a press conference, the Polk County Sheriff condemned the TBI for not issuing an alert, but TBI officials said during a press conference Tuesday that they stand by their decision to wait for more information.

"We asked 'is there any reason to believe that this child is in Tennessee,' their agency said no. We asked
'is the individual she's with a danger? Does he have any criminal history?' Again, said they said no," said TBI's Josh DeVine. "Based on the totality of facts at that point, we indicated that no, we were not able to issue an amber alert."

He went on to say they agency would not have done anything differently. He said they had problems receiving information from Florida, and didn't get the Nashville sighting confirmed until quite some time after it happened.

"No one wants missing children home more than the TBI. This is what our mission is about," said DeVine.

Tennessee's statewide alert ultimately led to the capture of Hogs and rescue of Rebecca.

According to the TBI, Hogs had active warrants out for kidnapping in Polk County, Florida and Auto Theft from Phenix City, Alabama.

Rebecca was reunited with her family in Florida, Tuesday.