A man has been charged with vehicular homicide in connection with a fatal crash in Antioch.

The six-vehicle collision happened Monday evening at the intersection of Blue Hole Road and Bell Road. 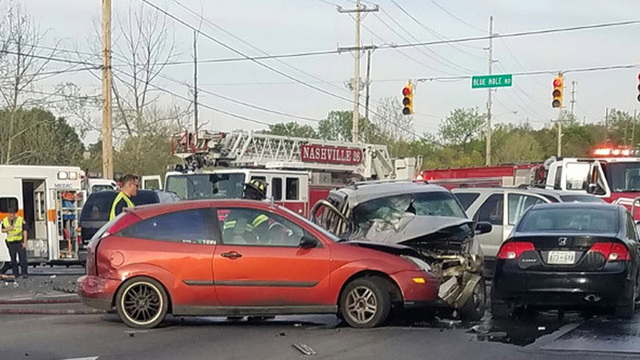 Officials with Metro Nashville Police said 30-year-old Austin Hullett III was speeding down Bell Road and did not stop at the red light on Blue Hole Road.

His vehicle hit a Chevrolet Suburban being driven by 66-year-old John Kurtz, of Antioch.

Kurtz was ejected from his SUV and died at the scene. Police said he was not wearing a seatbelt.

Hullett’s vehicle also struck a Ford Escape, which in turn collided with three other vehicles in the eastbound lanes of Bell Road.

According to investigators, none of the children were properly secured in the van.

The driver of the Ford Escape, Tommy Huff of Antioch, managed to survive the deadly chain reaction crash.

"I’m just devastated I hurt for him (the man who died) so bad. I mean I felt so bad seeing him there in the road and it makes me angry that somebody took this person’s life," Huff said on Tuesday.

The 43-year-old was three miles from home when he became involved in the crash. He says his first instinct was to get to the children who were inside of the burning mini van and screaming for help.

"I wanted to get them out first. I was afraid it was going to explode," he recalled.

A citizen reportedly told officers that Hullet struck her vehicle at the intersection of Bell Road and Cane Ridge Road before fleeing at a high rate of speed just before the Bell Road collision.

Hullett was charged with vehicular homicide, two counts of aggravated assault, reckless endangerment, and driving on a revoked license.  He was held in lieu of $111,000 bond.

"Wear your seatbelt. That is the most important thing in the world. If you have a seatbelt there’s no sense in not putting it on," Huff added.