Millions of Americans are expected to hit the roads and airports for what is projected to be the busiest Thanksgiving travel on record.

Millions of Americans hit the roads and airports for what was projected to be the busiest Thanksgiving travel on record.

Nearly 47-million Americans were anticipated to travel home this year for the holiday -- about 25-million of those traveled by air.

The day before Thanksgiving is notoriously busy for travelers and was one of the busiest days at Nashville International Airport.

They anticipated a record-number of travelers for Thanksgiving, perhaps due to the lower cost of flying this year. According to the Travel Company, airline tickets are ten percent lower than last year.

VIDEO: Take a look at the security line! It just got a lot longer within the last 15 mins. @NC5 pic.twitter.com/edUGM4myl1

As early as 5 a.m. Wednesday, travelers packed the airport as they waited in line at the security checkpoint.

The recently issued worldwide travel alert did not deterred millions from traveling this week, including the nearly 43,000 passengers expected to arrive and depart in Nashville.

Several of the passengers said getting to their families for Thanksgiving is their priority. However, everyone was asked to stay vigilant and be on the lookout for anything suspicious.

At least 10 TSA dogs were seen sniffing around the airport as security officials remained vigilant. 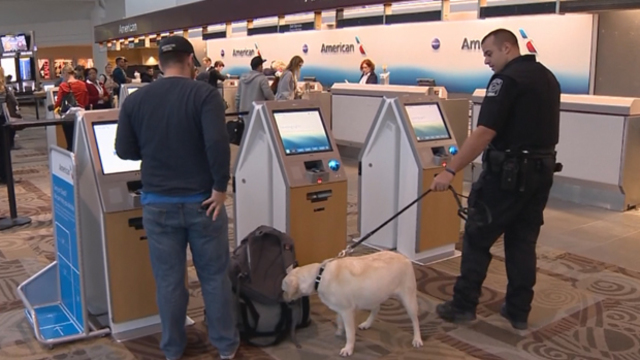 The U.S. government issued the worldwide travel alert in wake of the attacks in Paris and response to increased terrorist threats. The alert is in place until February 24.

The extra security  led to longer wait times for some.

You can check your flight status on the BNA website before heading out. Also try to arrive inside the terminal at least two hours before your flight.

Travelers should expect heavy traffic between Sunday and Monday, as well.