Gusty Winds Down Trees, Cause Damage In TN

Strong Winds Cause Tree To Fall On Car

Downed trees and structure damage was reported across portions of Tennessee as strong winds swept through the area.

A Tornado Watch remained in effect for most of Tennessee throughout the evening.

Metro’s Office of Emergency Management also activated its Emergency Operations Center at 6 p.m. due to the threat of severe weather.

The strong cold front moved into the region Tuesday afternoon as temperatures soared into the mid-70s. Tuesday's highest temperature hit 75 -- breaking the record for February 2 which was set at 71 degrees.

Areas east of Nashville seemed to get the most wind damage, particularly the City of Cookeville.

VIDEO: Residents are being asked to avoid the area. A lawnmower shop is also attached to the cleaners. @NC5 pic.twitter.com/jn3FtC1oXn

Strong gusts blew the roof off of Hour-O-Matic Dry Cleaners on East Spring Street. The adjacent business also suffered damage in the storm.

“I was thinking, ‘oh my gosh my entire contents are ruined,’ but luckily we had very little water damage in the lobby area,” said business owner Shawna Gaw. 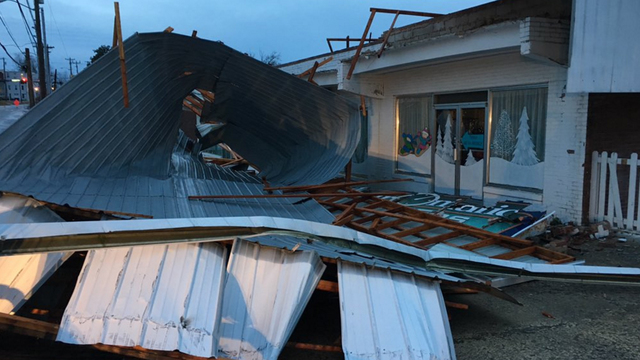 Nashville dodged the worst of the severe weather by only getting heavy rains and high winds.

Further north, strong winds caused damage in Clarksville during the first round of pop-up storms. A tree fell onto the personal car of an off-duty Clarksville police officer around 4 p.m.

The tree crushed the back windshield of the car and nearly hit the officer's patrol car.

No injuries were immediately reported in the storms.