The Tennessee Bureau of Investigation has been called in to investigate an officer-involved shooting in Murfreesboro after a man allegedly threatened his children and tried to run over a policeman before a pursuit.

Authorities have released the name of the suspect involved in an officer-involved shooting in Murfreesboro.

Officials with the Tennessee Bureau of Investigation said Michael Kilpatrick allegedly threatened his girlfriend's children and tried to run over a policeman before a pursuit ensued Sunday night.

Murfreesboro Police officers responded to the Regal Inn on South Church Street around 7:11 p.m. for a domestic violence call. The family apparently lived at the motel.

A suspect was shot just before a police chase began after he was threatening his children with a firearm in Murfreesboro. Video courtesy: Viewer Jess GrimesSTORY: http://on.nc5.co/1QEB3lB

When officers got to the scene, Kilpatrick had allegedly assaulted his girlfriend and was threatening the three children -- one of whom is his child -- with a gun.

At that point, investigators said he tried to evade officers and threatened them with his vehicle. That’s when authorities fired at Kilpatrick.

However, he was able to get away and a pursuit began. The children were still inside his vehicle at the time. 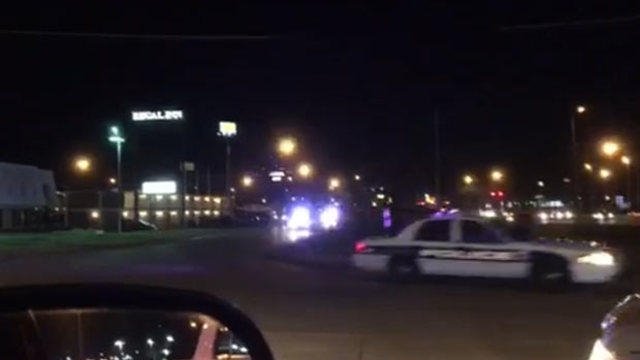 “Preliminary information indicating that the subject tried to run over a police officer with the vehicle, that resulted in Murfreesboro Police officers firing upon the subject,” said TBI spokesman Josh DeVine.

TBI officials said the pursuit ended on National Drive when Kilpatrick got out of his vehicle and surrendered.

He also indicated to officers that he had been shot. He was taken by LifeFlight to Vanderbilt University Medical Center for treatment.

Murfreesboro Police officials identified the officer as James O'Rourke. He's been placed on routine administrative leave with pay while the investigation continues.

Officer O'Rourke has been with the department since October 2013.