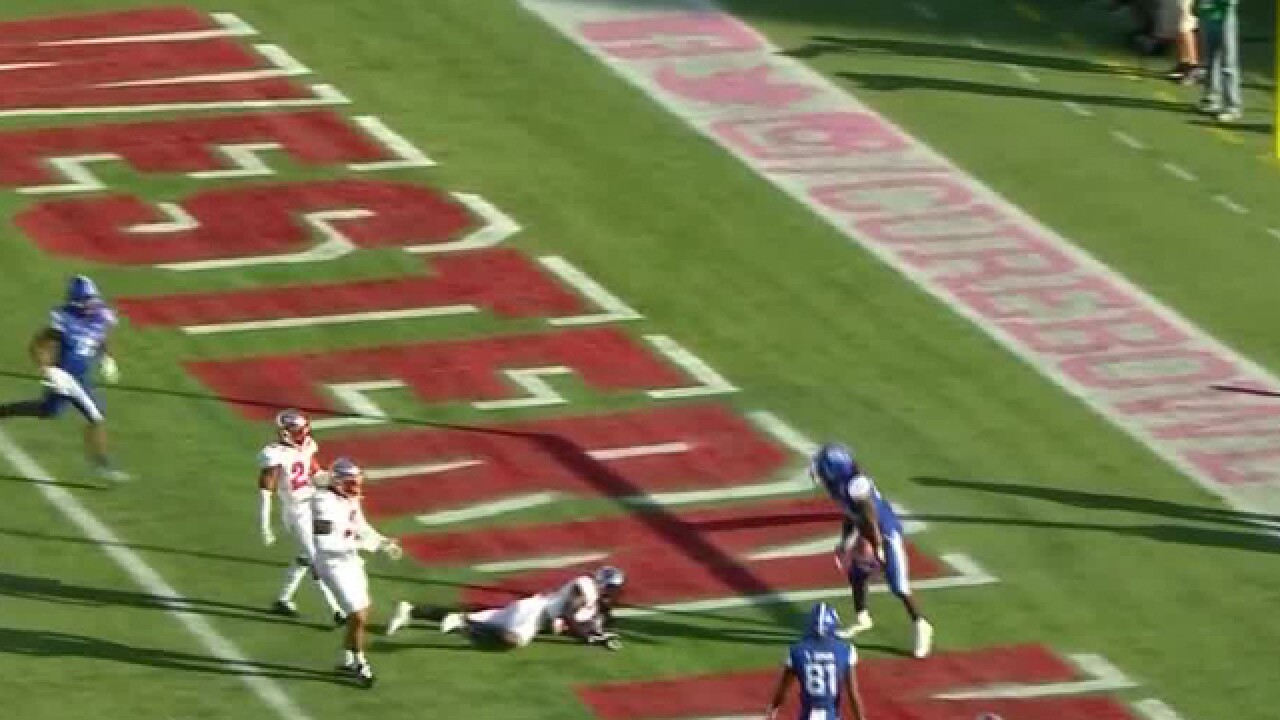 Conner Manning threw for 276 yards and a touchdown to lead Georgia State a 27-17 victory over Western Kentucky in the Cure Bowl on Saturday.

The Panthers (7-5) finished with a winning record with the first bowl win in Georgia State's eight-year football history.

Manning threw a 42-yard TD pass to Roger Carter, Demarcus Kirk scored on a 26-yard run, and Kyler Neal finished a 16-play drive consuming nine minutes of the fourth quarter with a 1-yard TD run that put Georgia State up 27-10.

Mike White tossed TD passes of 54 and 4 yards to Deon Yelder, finishing with 351 yards -- the senior's eighth consecutive 300-yard game passing -- for Western Kentucky (6-7). Yelder had five receptions for 112 yards for the Hilltoppers.

Georgia State star Penny Hart, the Sun Belt Conference leading receiver, did not start and played sparingly because of an ankle injury. His lone reception -- for 27 yards midway through the third quarter -- came on the play before Manning threw his TD pass to Carter.

Western Kentucky: The Hilltoppers won the Bahamas, Miami Beach and Boca Raton bowls the past three seasons, joining Clemson, Georgia, Louisiana Tech, Stanford, Utah, Virginia Tech and Wisconsin as the only team with bowl wins each of the past three years. The chances for a fourth straight win were hindered by three turnovers -- one of them on a trick play early in the fourth quarter -- and six sacks.

Georgia State: Playing in the Cure Bowl for the second time in three seasons is a nice accomplishment for an eight-year-old program. The Panthers finished fourth in the Sun Belt under first-year coach Shawn Elliott, but placed nine players on the league's all-conference team.

Western Kentucky: The game was the last for 19 seniors, including White, who began his career at nearby South Florida. The class won 37 games -- second-most by the Hilltoppers as a FBS program. In addition to a new starting quarterback, there will be opportunities to shine at wide receiver, where departing seniors Nacarius Fant, Cameron Echols-Luper and Kylen Towner combined to catch 134 passes for 1,423 yards and 10 TDs this season.

Georgia State: Like Western Kentucky, the Panthers will try to build off this year's success with a new quarterback. Manning's successor will have some productive players to work with, beginning with Hart --a 5-foot-8, 180-pound sophomore who led the Sun Belt in receiving with 74 receptions for 1,121 yards and eight TDs.