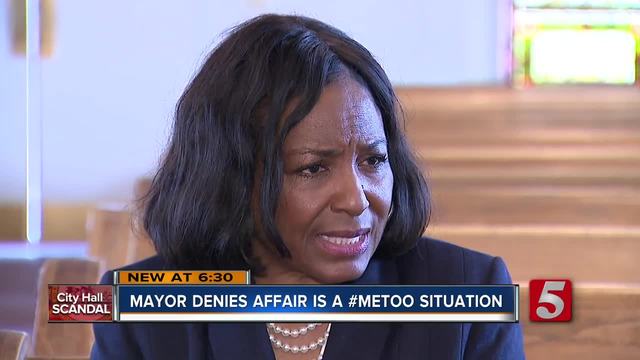 If you search #MeToo on Twitter, you can find thousands of posts dealing with workplace sexual harassment. Mayor Megan Barry has been under fire for a similar issue, but she argued her situation isn't the same.

If you search #MeToo on Twitter, you can find thousands of posts dealing with workplace sexual harassment.

Mayor Megan Barry has been under fire for a similar issue, but she argued her situation isn't the same.

"This is a consensual relationship between two middle-aged people who had feelings for each other, and what we did was wrong. I'm not running away from that, but this is not the Me Too movement," Barry told NewsChannel 5 in an exclusive interview.

Barry sparked controversy after admitting to an affair with the head of her security detail. He has since retired, but  she still holds her office and said she will not step down.

"I say it's not a Me Too situation because of the consenting adults because of the age of the adults," said Dr. Gwen Brown-Felder, pastor of Brooks Memorial United Methodist Church.

Dr. Brown-Felder has counseled people in similar situations and said the lines could be blurred when it comes to the Me Too movement.

"It's a great tension in this situation because we have a female in power in a patriarchal somewhat society where males are in power, that makes you go wow. Can this be characterized as a Me Too situation?" said Dr. Brown-Felder.

You probably didn't know, but the Me Too movement actually began ten years ago to encourage people to speak out about sexual violence and harassment. Most victims have been women, but Dr. Brown-Felder feels just because the mayor is a woman, she should not be held to a different standard.

"There is a higher accountability once you make a choice to lead. It doesn't say you're not going to make mistakes," she said.