A mental evaluation found that the accused Waffle House shooter, Travis Reinking, may be incompetent to stand trial.

A mental evaluation found that the accused Waffle House shooter, Travis Reinking, is not competent enough to stand trial.

The mental evaluation of Rainking began four months ago and has been completed. A motion was filed, requesting a hearing to "determine whether the defendant is competent to stand trial and in need of judicial hospitalization."

Reinking was checked into the Middle Tennessee Mental Health Institute for evaluation on July 12.

On Aug. 9, Forensic Services for the institute notified the court that he was not fit to stand trial and was in need of immediate hospitalization.

Some family members of the victims say they were contacted by the District Attorney's office and have been told Reinking is not competent to stand trial. 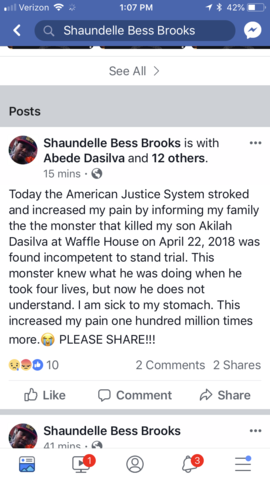 Reinking was charged in the killing four people at a Waffle House in Antioch this past April. In an exclusive phone interview with NewsChannel 5 Reinking was asked about his mental fitness.

He also said he planned to handle his own legal defense.

"That's the thing. I'm choosing to represent myself. I don't know how that works. I didn't like those attorneys," Reinking told NewsChannel 5's Nick Beres.

That didn't happen and he does have a public defender who requested the mental evaluation.

NewsChannel 5 has learned, based on the finding of incompetence, a motion has been filed asking for Reinking to be placed in an inpatient mental care facility like Middle Tennessee Mental Health.

If that motion is granted he will receive treatment there until he is found to be mentally competent to stand trial.

In other words, the prosecution of Travis Reinking grind to a halt. This will mean a likely lengthy delay, weeks and possibly months, before any trial date can be set.

Several family members of the victims have expressed frustration over this latest development.

It remains to be seen if the District Attorney will challenge the finding of mental incompetence. Prosecutors could not comment because of a gag order on the case.