An MTSU student survived a storm that swept him down a river and over a waterfall in southern Illinois.

Posted at 6:07 PM, Jul 12, 2016
An Middle Tennessee State University student survived a storm that swept him down a river and over a waterfall in southern Illinois.
Thomas Hammond and his two friends traveled to Shawnee National Forest, just north of Paducah last Tuesday. They stayed at a campsite right next to the river.
However, their trip was cut short when a storm rolled through the following night. The downpour caused the level of the river to rise and flood the campsite.
"I remember yelling at everyone to get out," TJ Rubert, Hammond's friend recalled. "I was concerned we weren't able to get out in the van."
In seconds, Rubert and their friend Tristan Vogel got out safely, but Hammond was stuck. He was still inside his tent with his dog when the river pulled him in.
"That's when I tried to claw through the ground trying to stand up, I couldn't breathe and thought I was going to die," Hammond told NewsChannel 5.
Hammond remembered the raging river dragging him down and being tossed around by rocks. His tent eventually ripped open but did not know where he was going since it was completely dark.
"I remember hitting my head and seeing lights," Hammond said. "It got fuzzy."
Hammond eventually went over Jackson Falls, a 30-foot waterfall, and continued down the river past large boulders before he grabbed onto a tree. 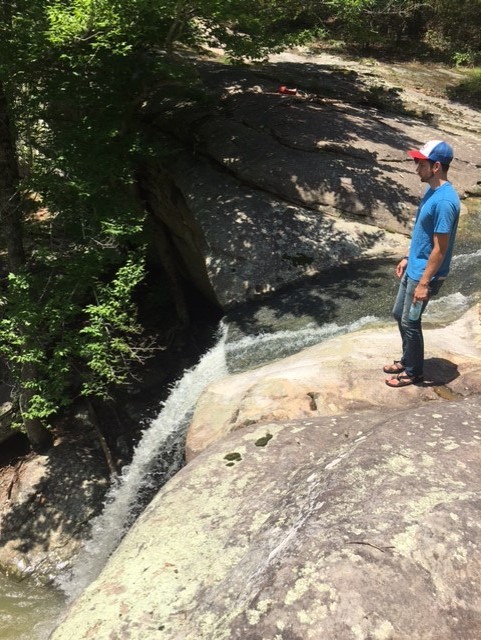 "I bear hugged it and that's when I stopped," Hammond remembered. "I saw a group of trees with the help of the lightning and thought that should be my next stop."
With nothing but head lamps, Rubert and Vogel searched for their friend and traveled three-fourths of a mile while jumping creeks and slipping over rocks. They found his red tent mangled and eventually heard a faint call for help.
Vogel drove to a nearby town to get assistance since they could not reach anyone by phone while Rubert stayed with a clearly distraught Hammond.
"I found him sitting there shaking, I was relieved because I thought he was gone," Rubert added.
Both men laid under a space blanket in the mud for about three hours before emergency responders arrived. They said they kept in good spirits and even cracked some jokes.
Hammond was flown out of the forest and transported by ambulance to a Cape Girardeau hospital.
He suffered broken ribs, fractures to the head and a collapsed lung. Hammond returned to Murfreesboro Saturday night and was already up and running.
He credited his two friends for searching for him in the dark despite the elements they faced.
Hammond's dog did not survive and was found about a mile down the river. The family has set up a gofundme account to help Hammond since he lost all of his belongings.
To make a donation, click on this link.
Copyright 2016 Scripps Media, Inc. All rights reserved. This material may not be published, broadcast, rewritten, or redistributed.