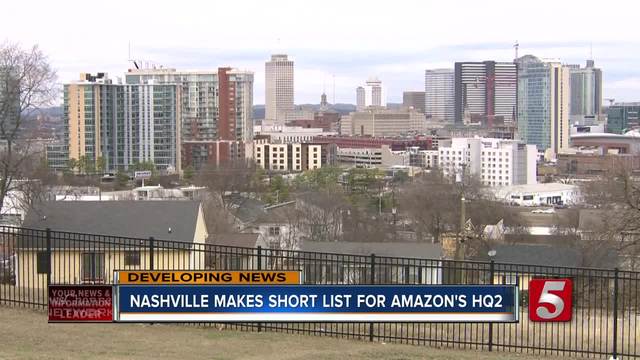 Amazon announced that Nashville was among 20 cities still under consideration for their second headquarters, or HQ2, on Thursday, with no specific timeline on when the list could be narrowed or a city picked.

Amazon announced that Nashville was among 20 cities still under consideration for their second headquarters, or HQ2, on Thursday, with no specific timeline on when the list could be narrowed or a city picked.

“We were notified this morning that the Nashville region, along with 19 other cities, has been chosen to continue the site selection process for Amazon’s second headquarters,” Andrea Albers with the Nashville Chamber, said. “At this point, that is all that has been shared by Amazon.”

The news has sparked speculation about what an influx of 50,000 Amazon workers and billions of dollars into the economy would mean for Middle Tennessee and where the Amazon headquarters could be located.

In January of 2017, it was announced that a group had purchased 120-acres of land on the east side of the Cumberland River just north of Jefferson Street with plans to develop the area.

The project is called “River North” and started with the construction of Top Golf, and it’s possible that it could serve as the location where an HQ2 could be placed. The area would be ideal for Amazon workers to not only work, but to live and play.

The group behind River North said in a statement that they could not confirm that Amazon is considering their site, but did provide the following from Don Allen:

“We want to congratulate the state and local economic development officials who have worked so hard on the Amazon proposal. We believe that Amazon will eventually come to the same conclusion that we have – that Tennessee is the best place in the United States to live, work and do business.”

Amazon already has numerous connections to Middle Tennessee, including distribution centers and an Amazon Music office, and music is becoming a specific focus for Amazon as a company.

Amazon Music sees some of their best success with country music, with their top playlists and stations comprised of country music.

Amazon has also worked out an exclusive deal with Garth Brooks to stream and sell the country music superstar’s music.

A move to Nashville could give the company much easier access to the country music world with much more focus and collaboration.

Now the question is what comes next? City officials said on Thursday they plan to work closely with Amazon in the coming weeks and months to try and convince them that Nashville is the right city for them.

In the end, Amazon said they plan to make their HQ2 equal to their current Seattle headquarters, which has brought billions of dollars into the Seattle economy.

Whether Nashville wins the bid for HQ2 or not, Associate Dean of the College of Business at Lipscomb University, Andrew Borchers, said the announcement of Nashville making the final 20 sets up the city for future business success.

“If Amazon wants to come, that’s great, but if [Nashville is] attractive enough to Amazon, surely it’s attractive to a lot of other companies," Borchers said.