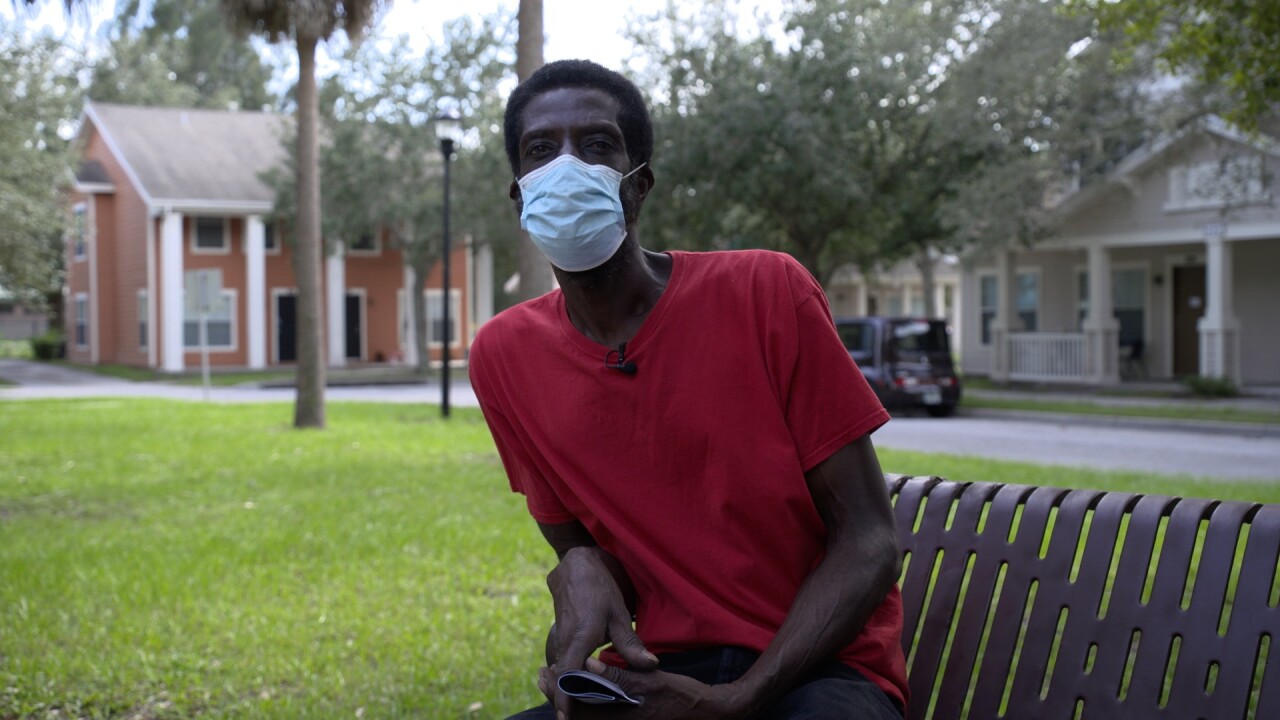 TAMPA, Fla. – Two different paths led Ernest Johnson and Ronnie Reddish down the same road. Just a few weeks from Election Day, the two men met at a park in Tampa, Florida, to talk life, liberty and voting rights as a former felon.

“How much time did you do?” Reddish asked Johnson.

Johnson replied, “I did 28 years in prison, and I ain't got no shame in that ‘cause prison made me a man.”

Now, it was Reddish’s turn to get personal.

“My first time, I was 24,” he said of his first experience behind bars.

Reddish spent more than 15 years of his life in prison.

“They were all just for thefts and drugs,” said Reddish. “It was about making money illegally.”

He’s been paying for those mistakes every day since he came home.

“I really, really regret a lot of things that I did,” said Reddish. “I’m remorseful. I mean, I sit back, and now 60 years old—I think about it. Why? Why was I so dumb to do something like that?”

In losing more than a decade of his freedom, Reddish lost something much more precious in the process: his right to vote.

Reddish came to meet Johnson, a voting rights advocate, thinking he couldn’t vote. Reddish finished paying all his court fines earlier this year after serving his time, but he was still unsure if his rights were restored.

“The language the legislation uses is confusing sometimes,” said Reddish.

Reddish is talking about the language of Amendment 4, a law passed in 2018 by 65% of Florida voters.

The amendment gives all former felons the right to vote, except those charged with murder or sexual crimes. However, before someone can vote, all court costs, fines and fees must be paid separately to each county the felon has a case in—an amount usually around $1,500 to $2,500 per person.

Once all fees are paid, a person’s voting rights are automatically restored, but for many, the old systems that were in place are still top of mind.

“I was under the impression that you had to go to the clemency board, which could take years,” said Reddish of how he thought he had to get his voting rights restored.

That’s no longer the case, and it’s a common misconception. Amendment 4 abolished the clemency board, which automatically gave voting rights back to some, but officials say having to pay all the fines before voting is disenfranchising so many more than this law could be helping.

“The constitution does not say we have to pay a tax to vote,” said Johnson.

Even if a person has the money to pay, finding out how much one owes is no easy task, especially if someone owes fines multiple counties.

“None of them have a uniform system to pay off fines and fees,” said Johnson. “It’s not that simple.”

Johnson works with the nonprofit Florida Rights Restoration Coalition. The group is streamlining the process for as many former felons as they can. Every day, Johnson and many others go door to door, offering information, registration documents and helping pay off as many fines as they can.

The group has paid off more than $3 million in fines for former felons.

This effort is supported by multiple Florida state attorneys who are fighting against the disenfranchisement they say is caused by Amendment 4.

“It's creating two classes of voters: people who can afford the right to vote and people who can't,” said state attorney Andrew Warren, who represents one of the largest districts in Florida. “That's not democratic. It's not American. And in Florida, it should not be acceptable.”

Warren said there is no uniform implementation of Amendment 4 across the state, and that is keeping people from voting—people like Reddish.

“The confusion we've had is actually chilling people's willingness and ability to go in and register to vote and that's a bad thing for our democracy,” said Warren.

To help, Warren is encouraging people to try and find out what they owe, but if they can’t figure it out by Election Day, he wants people to know: his office likely won’t take legal action against them for voting.

“The standards for prosecuting someone for voter fraud is extremely high,” said Warren. “We expect that the majority of cases here are going to be people who are simply confused, and they don't know whether they're eligible to vote or not. And, doing so is not a crime in those situations because it's not on the voter to figure out. We're supposed to be making it clear to people what the law is, and what they need to do to be eligible to vote.”

For Reddish, he didn’t get the answers he needed from the state. He got the truth from Johnson.

He is eligible to vote. No clemency needed. Johnson was able to register him on the spot. A moment is giving Reddish his first chance to vote.

For so many who haven’t finished paying their fines, their voices may be silenced for the 2020 election, but Warren said he will not stop fighting the state to get the fines and fees requirement removed from Amendment 4.

Until that happens, it will take more afternoon meetings at the park and more door knocking to give a voice to those picking up the pieces from a broken past.

Making sure every citizen has the rights they’ve earned is something Johnson, and now Reddish, are ready to fight for.

“I want to join the organization,” said Reddish.

They’re hoping they can bring light to as many as they can in a state where just a few new voters could swing the outcome of the 2020 election.

“Voting is freedom, is democracy, is liberty,” said Johnson.