Trump attacks Sen. Susan Collins over rumors that she plans to vote against his SCOTUS nominee 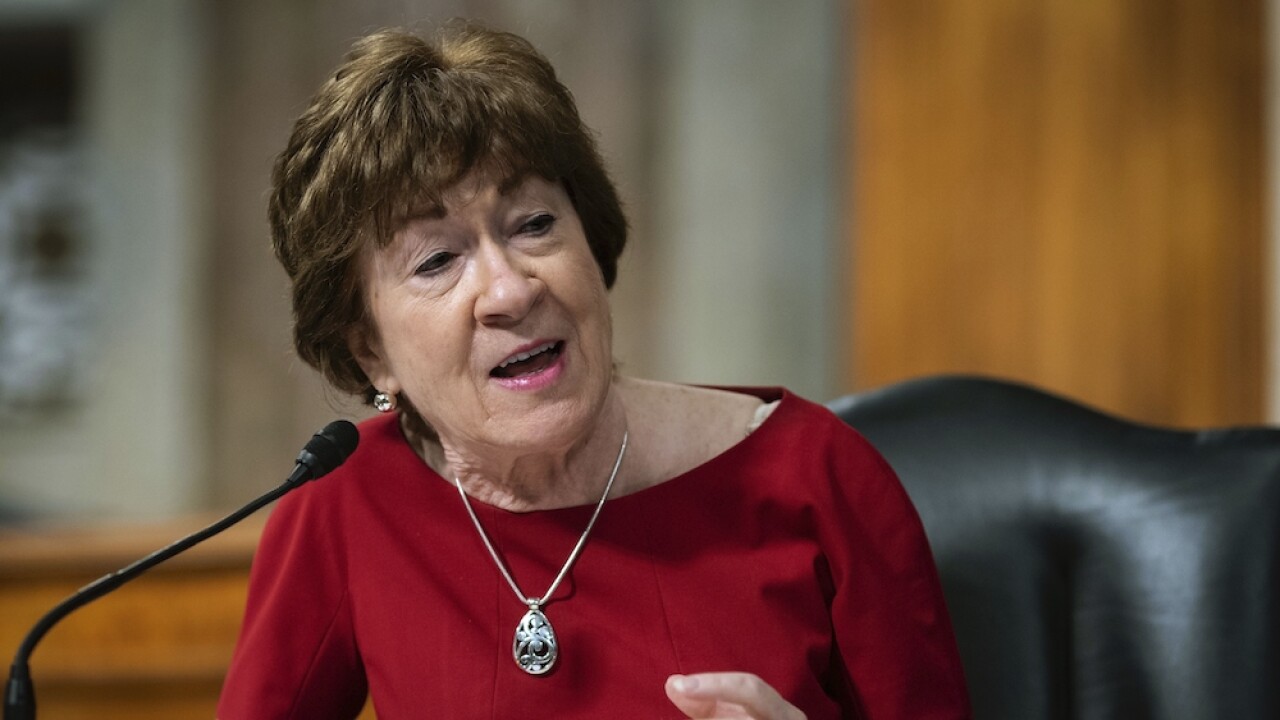 Al Drago/AP
FILE - In this June 30, 2020, file photo, Sen. Susan Collins, R-Maine, speaks during a Senate Health, Education, Labor and Pensions Committee hearing on Capitol Hill in Washington. Collins is once again in a pressure cooker over an issue riveting the nation. This time it's the battle over President Donald Trump’s effort to replace the late Justice Ruth Bader Ginsburg on the Supreme Court. (Al Drago/Pool via AP, File)

President Donald Trump attacked Republican Sen. Susan Collins on Twitter on Friday, saying that rumors about her planning to vote against his Supreme Court nominee are "nasty" and that it's "not worth the work" to try and swing her vote.

"There is a nasty rumor out there that @SenatorCollins of Maine will not be supporting our great United States Supreme Court Nominee," Trump said. "Well, she didn’t support Healthcare or my opening up 5000 square miles of Ocean to Maine, so why should this be any different. Not worth the work!"

While Collins has not confirmed that she plans to vote against Barrett's nomination, she has said the duty of filling Justice Ruth Bader Ginsburg's Supreme Court seat should fall to whoever wins the 2020 general election. The New Yorker also reported on Wednesday that Collins called Barrett's testimony during her hearing "worrisome," saying that she appeared "evasive and wishy-washy."

There is a nasty rumor out there that @SenatorCollins of Maine will not be supporting our great United States Supreme Court Nominee. Well, she didn’t support Healthcare or my opening up 5000 square miles of Ocean to Maine, so why should this be any different. Not worth the work!

Senate Majority Leader Mitch McConnell says Republicans currently have enough votes to confirm Barrett during a vote on Oct. 25. Sen. Lisa Murkowski, R-Alaska, is the only Republican who has indicated that she will not vote to confirm Barrett. Even if Collins chooses not to confirm, Republicans would still reach the 51 votes needed to put Barrett on the court.

Collins did vote for the confirmation of Justice Brett Kavanaugh in 2018. She and Sen. Joe Manchin, D-West Virginia, were the deciding votes in a 50-48 tally that put Kavanaugh's confirmation over the top.

Collins, a moderate Republican, did vote against Trump's healthcare plan in 2017. According to FiveThirtyEight, Collins votes in line with President Donald Trump's views 67.5% of the time — the lowest amount of any Republican senator.

Collins is up for re-election in November. A Siena College/New York Times poll conducted in September indicated that she trails her opponent, Democrat Sara Gideon, by five points, while a Quinnipiac University poll conducted at roughly the same time showed Gideon leading by 12.