The look on Seth Dixon’s face as he proposed to his girlfriend said it all, but not in the way you might think.

The look on Seth Dixon’s face as he proposed to his girlfriend said it all, but not in the way you might think.

According to a post on wedding photographer Staci Dabney’s Facebook page, Dixon had taken his girlfriend, Ruth Salas, to Loose Park to ask her one of the most important questions in both of their lives.

"We've been dating for almost four years and we knew this day was coming," he explained.

The setting was as picturesque as it gets. Imagine a beautiful wooden bridge stretching over a pond with gorgeous fall weather and lush greenery creating a dreamy background.

"I knew I wanted to propose (at Loose Park) just because it's kind of our spot," Dixon explained. "We just kind of fell in love with the park and the beauty of it."

Of course, cameras were rolling as Dixon fell to his knee.

"Next thing you know, it's happening. I couldn't believe it," Salas explained. "At first, I was like, 'Oh my goodness. This is happening. He's on one knee.'"

Excitement was written all over his and Salas’ faces, but their expressions soon turned to looks of horror.

Dixon opened the little black box to reveal the ring… just before it flipped out of his hands, through a tiny crack in the boards of the bridge, and into that pond below.

"It ping-ponged through the crack and I hear it plop in the water," Salas said. "I didn't know what else to think but, 'Oh my goodness.'" 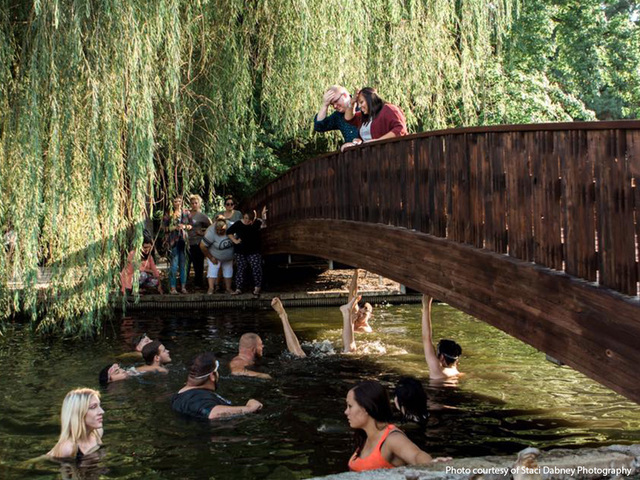 Friends of the couple got to work to try to find the ring, donning goggles and other swimming gear to search the neck-deep water for the lost band.

Maddie Villareal, a longtime friend of Dixon, was one of the people who helped in the search.

"The bottom was the worst part because it was like slimy, muddy and there were sticks everywhere," she explained. "I know (finding the ring) was important to them. If it was me, I would hope they would do it for me."

They sadly were not able to find it, so instead set up a GoFundMe page to help the couple purchase a new one.

"It's been a roller coaster. Emotions have been up and down," Dixon said. "After seeing the video over and over we just started laughing about it."

Moving forward, the couple said the ring incident would add to the story of their relationship.

"We've been together for four years with ups and downs," Salas explained. "I'm not leaving him because of a lost ring."

Dixon and Salas are set to tie the knot in October