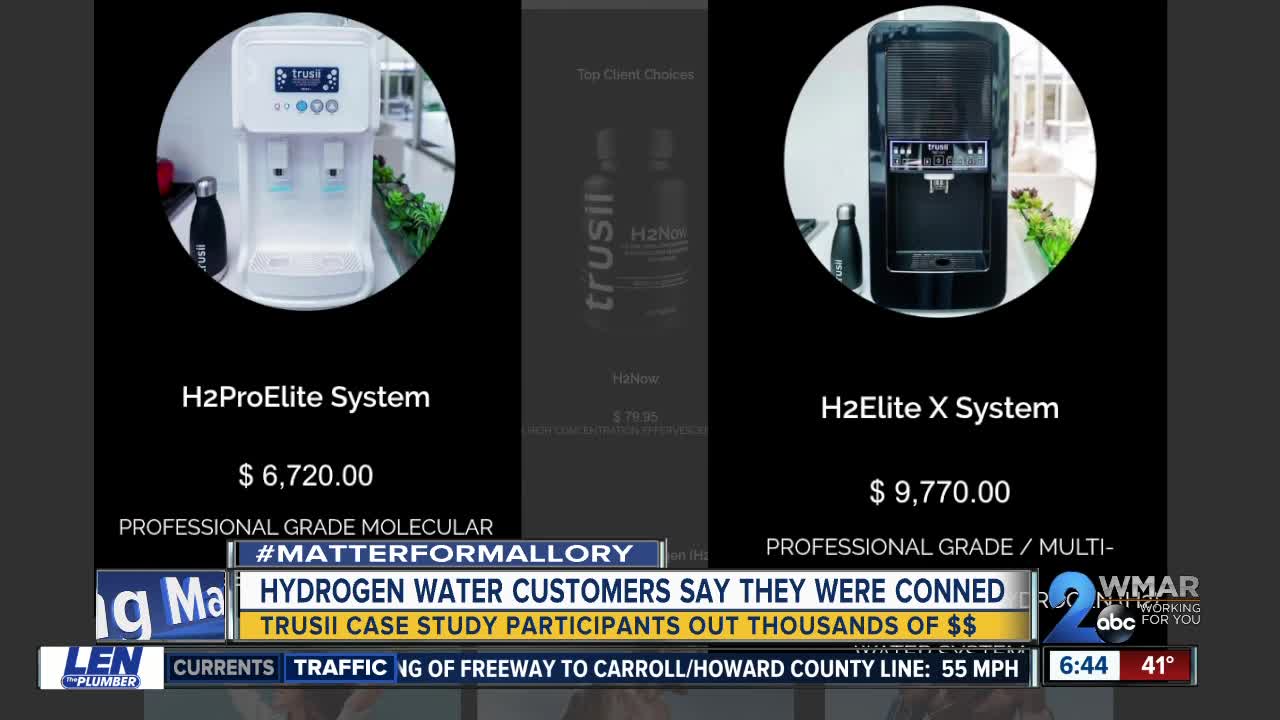 Trusii case study participants say they were told they could get a machine at no-cost, but are now stuck with loans for thousands of dollars. BALTIMORE, Md. -- Consumers hoping to improve their health say they were tricked into buying a molecular hydrogen water dispenser for thousands of dollars.

Trusii, the seller of molecular hydrogen water systems, offered a case study program whereby participants can try the machine and have it paid off in monthly installments in exchange for filling out questionnaires and posting testimonials.

Trusii case study
John Schneider, a recent college graduate and personal trainer, had heard about the benefits of hydrogen water and learned about Trusii's offer through a friend who was in the case study.

In addition to his friend, Schneider saw a number of social media influencers endorsing the product. He decided to apply to the program and was accepted. Schneider financed the $9,970 water system with one of Trusii's lending partners, and in an email, Trusii confirmed that Schneider would be sent monthly installments to help cover the loan payments if he complied with the terms of the case study.

"Before I got my machine they already sent me the first check, so I figured okay, they're pretty sincere so far," said Schneider.

Even so, Schneider stopped receiving the monthly payments from Trusii.

"And then the second month came, I wasn't receiving a check," said Schneider. "By the third month, I didn't get another check again, so I was basically behind two checks."

Schneider kept paying his loan while trying to get a response from the company.

"It would've ruined my credit score, I would've had a hard time purchasing other things in the future," said Schneider.

Complaints accumulate
While looking for a solution, he found a Facebook group with 500+ members claiming to be in a similar situation.

"There were people in the Facebook group who knew this was a scam, were still trying to fulfill their questionnaires, were still posting good reviews, and that was just adding on to bringing in other new people, new victims," said Schneider. "People were still expecting or hoping they were going to get another check."

The Florida Office of the Attorney General has received more than 100 complaints against the company. The complaints are under active review, according to a spokeswoman with the agency.

"They have claims of health outcomes that are, in our opinion, questionable if not totally unsubstantiated," said Angie Barnett, president & CEO of the BBB serving Greater Maryland.

The Better Business Bureau has also heard from case study participants who said they didn't receive payments on time, or were sent defective machines.

Barnett added that the company's advertisements for selling access "to the most powerful and therapeutic antioxidant-rich water on earth," attracted customers in search of a cure to serious conditions.

"A lot of people who are looking to this product, they already have health issues, they already have medical bills. They may be looking for this to supplement chronic issues, so this isn't the only payment they've got to make and that appeal has been very aware when you read the complaints," Barnett said.

Customers seeking relief from lenders
Schneider's lender, Lending Point, let him out of his loan after he explained the terms and conditions were never made clear. Other lenders haven't been as forgiving.

Emails show that United Midwest Savings Bank wasn't aware of the consumer's agreement with Trusii relating to the case study, and they don't believe that impacts their collection on the loan. As a concession, the company agreed to stop collecting interest.

In addition to the complaints above, several Trusii customers sent WMAR-2 News Mallory Sofastaii email offers from the company to opt-out of the case study program "so long as [the customer] remove anything negative [they've] publicly said about trusii on all media platforms." The email included a non disparagement agreement, which according to the Consumer Review Fairness Act is illegal.

In July, Greensky filed a civil lawsuit against Wellness Program Services, LLC (doing business as Trusii) and Jeffrey Taraday, an owner of the business. According to court documents, Greensky, a consumer lending platform, said it received complaints from consumers that Trusii failed to deliver the H2 systems and didn't issue refunds; delivered defective systems and failed to replace the system or issue a refund; or failed to pay consumers enrolled in the case study program for their participation, despite promising to do so. Greensky is seeking declaratory relief in excess of $1,000,000, "as Trusii and Taraday have collected over $1,000,000 from consumers Via the Green Sky Program," according to the lawsuit filed in Georgia.

Taraday said his lawyers are in the process of filing a countersuit against Greensky for $15 million.

Trusii's response
In an email, Taraday accused various members of the Facebook group, "especially the administrators," of committing federal bank fraud stating they're seeking media coverage to "have more leverage against the banks to get loans forgiven when they do not deserve to be forgiven." He added that four individuals "have made this a personal vendetta," and three of them are competitors in the industry. Taraday also said they never went through with the "opt-out" agreement or non disparagement clause.

He also added that there's "not one lawsuit against us" and they've "paid out over 1.6 million dollars to program participants over the past two years that did not complete their requirements."

"The bottom line is this: we are actively working with hundreds of clients to provide the best customer service possible, service their systems if needed (over 100 systems have been serviced and upgraded around the country in the past few months), and provide solutions for our clients who would like to move forward positively in our program. We have hundreds of clients who have been positively affected in profound ways by our technology and have nothing but good things to say about our systems and our company," Tarraday wrote.

This story was originally published by Mallory Sofastaii at WMAR.