Thousands were without power in New York Monday morning. But some, like this man in the Canarsie section of Brooklyn made the most of it by directing traffic. 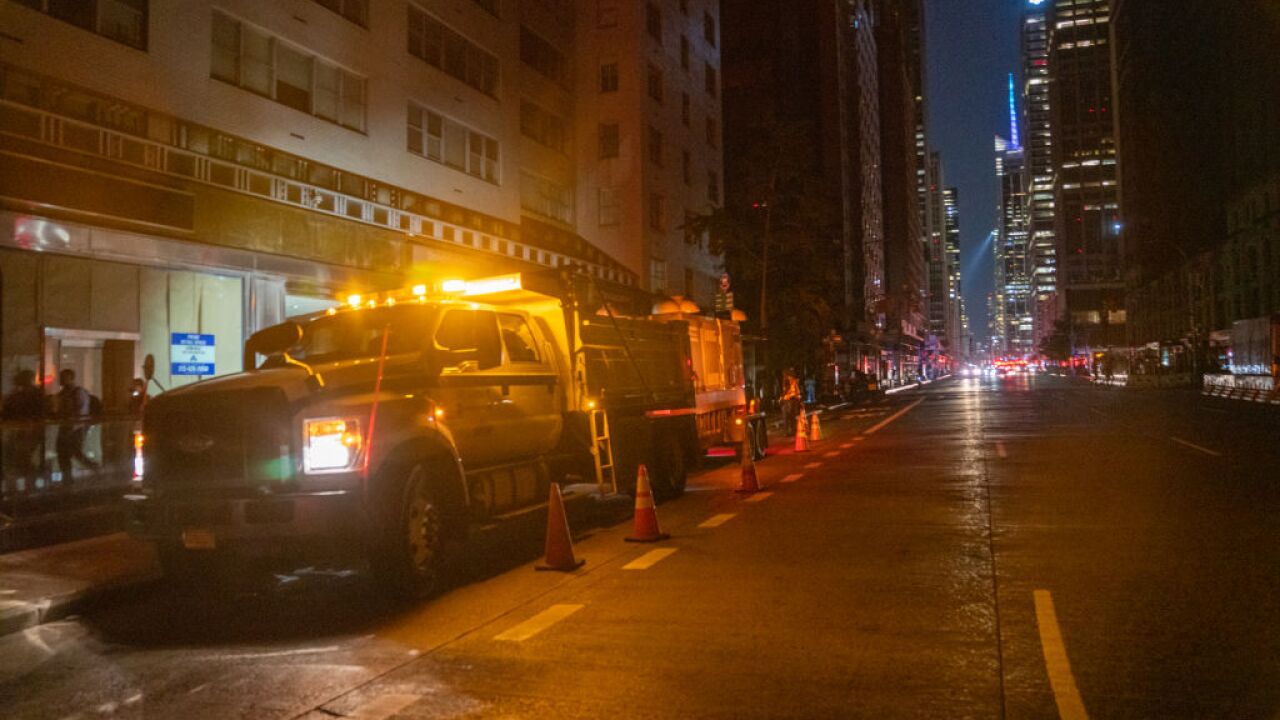 Thousands waking up in New York City and Michigan this morning are still without power.

In the Big Apple, 21,500 Con Edison customers have no electricity, though lights and air conditioning are expected to go live by this afternoon, the utility company said in a press release Monday morning.

Of these customers, 14,000 reside in Brooklyn, including the neighborhoods of Canarsie, Flatlands, Mill Basin, Old Mill Basin, Bergen Beach, Georgetown and part of East Flatbush. An additional 7,500 customers who are not receiving services are scattered throughout the city and Westchester County, according to Con Edison.

Lights and air conditioners went off Sunday afternoon, just before dark, as a result of high usage in the continuing heat, according to Con Ed. Temperatures soared to 100 degrees over the weekend in the Big Apple, though Monday's excessive rain is expected to cool the area and drop temperatures to the low 80s, according to the National Weather Service.

In southeast Michigan at least 250,000 customers are still without power, including the Detroit metropolitan area, according to a Monday morning update from DTE Energy. A large storm knocked out power lines Sunday and initially left 600,000 customers without access to electricity, DTE said. Power is expected to be fully restored by the end of the day on Wednesday, the utility company said.

The weekend's severe thunderstorms have given way to sunshine in lower Michigan, where temperatures are expected to reach a pleasant high of 78, according to the weather service.

In New York City, the power outages affected traffic lights but resulted in "no arrests, no summonses, no reports of any problems at all," NYC Mayor Bill De Blasio said at a Monday morning news conference. Speaking from an emergency management command post set up in Brooklyn, the mayor said that little more than a week ago, a power outage "that came out of nowhere" occurred in Manhattan and now following the heat wave -- "obviously a predictable situation and therefore preventable" -- another outage.

"We don't have any good answers yet why this was not prevented," said de Blasio, who added that Con Ed has not responded to his request for answers about why the outage happened, though it appeared to result from a malfunctioning piece of equipment.

"We were informed as it was happening," said de Blasio. "Con Ed made this decision unilaterally. They made a conscious decision to pull out electricity from this area."

The mayor thanked the NYPD, New York State Police, which supplied a couple hundred officers to be deployed in the city; first responders and the FDNY, which proactively went to the homes of people who needed assistance.

While the total economic impact remains unknown, the harm done to customers, some elderly and vulnerable to the heat, is obvious, said De Blasio.

"I want to see people appropriately compensated," said the mayor. "Bottom line: this should not have happened and we're going to make sure this doesn't happen again."

In southeast Michigan, DTE Energy said it has already repaired nearly half of the more than 2,000 wires downed by the severe weather that whipped through the region over the weekend, and its crews have been working 16-hour shifts around the clock to restore power.

"More than 1,100 employees and contractors are in the field and nearly 750 workers from as far as Georgia and New York have joined our restoration efforts with additional crews arriving throughout the day today," the company said in a statement.

DTE also urged the public to be careful of any downed wires. Pedestrians should assume that any fallen line is energized and stay at least 20 feet away, while motorists should never drive across downed power lines. If a line falls on a vehicle, passengers should remain inside until help arrives.