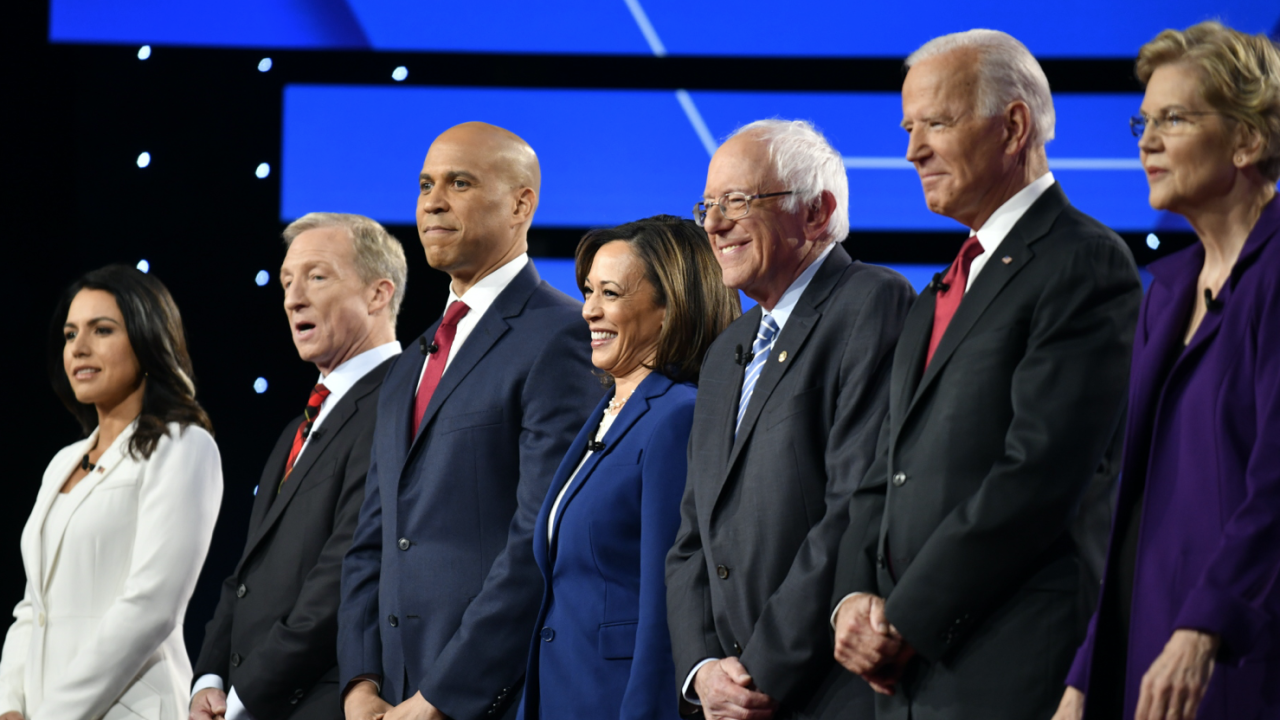 Welcome to CNN's fact check of the fourth Democratic presidential primary debate . We will be posting our checks of candidates' claims as we complete them through the night.

This debate in Ohio hosted by CNN and The New York Times features a record 12 candidates who met polling and fundraising thresholds set by the Democratic National Committee.

It is the first time the Democratic presidential hopefuls are on the debate stage since the House of Representatives launched a formal impeachment inquiry into President Donald Trump. The President, and his attacks against former Vice President Joe Biden, have come up in tonight's debate .

The three previous debates (fact checks here , here and here ) have focused on the candidates' policies and past records.

Asked about his son's international business dealings, former Vice President Joe Biden said, "I never discussed a single thing with my son about anything having to do with Ukraine. No one has indicated I have."

Facts First: Hunter Biden has indicated otherwise. In both an interview on ABC that aired today and a New Yorker article from July, he said that he had spoken briefly with his father about his involvement with Ukrainian company Burisma Holdings.

According to the New Yorker, "As Hunter recalled, his father discussed Burisma with him just once: "Dad said, 'I hope you know what you are doing,' and I said, 'I do.'" However, the New Yorker article did not make clear whether Hunter Biden said there were any more details as part of the father-son exchange.

In the ABC interview , Hunter Biden initially minimized the exchange saying "it wasn't a discussion in any way," before acknowledging the New Yorker's characterization was accurate.

After publication, in a statement to CNN, Biden's campaign argued that the exchange did not amount to a conversation about Ukraine.

"'I hope you know what you're doing,' and 'I do,' is not a conversation. That's a failed 'gotcha' -- and if that's the best the most dishonest president in American history can do, it's even more clear why Joe Biden's annihilated him in over 70 polls," said Andrew Bates, a Biden campaign spokesperson.

Facts First: This claim is true. Trump has publicly invited Russia, China and Ukraine to interfere in US elections.

During the 2016 presidential campaign, Trump infamously suggested Russia find emails belonging to his opponent, Democratic nominee Hillary Clinton, from her time as secretary of state that were wiped from the private server where she kept them.

"Russia, if you're listening, I hope you're able to find the 30,000 emails that are missing. I think you will probably be rewarded mightily by our press. Let's see if that happens. That'll be next," he said during a press conference in Florida.

Trump then asked the president of Ukraine to investigate former Biden, a potential political rival in the 2020 election, during a phone call on July 25, 2019. Trump has insisted the call was "perfect" but that conversation is the focus of a whistleblower complaint at the center of Democrats' impeachment probe.

In October 2019, Trump suggested — without prompting — that China should also investigate Biden and his son.

Buttigieg and Klobuchar: 150 million people will have to change health insurance under Medicare for All

South Bend, Indiana, Mayor Pete Buttigieg argued for expanding the Affordable Care Act rather than moving to Medicare for All, the government-backed health care program supported by Sens. Bernie Sanders and Elizabeth Warren.

"I don't understand why you believe the only way to deliver affordable coverage to everybody is to obliterate private plans, kicking 150 million Americans off of their insurance in four short years," Buttigieg said.

A moment later, Minnesota Sen. Amy Klobuchar made a similar point, arguing that extending Obamacare was "what we should be doing instead of kicking 149 million people off their insurance in four years."

Facts First: The figures cited by both Buttigieg and Klobuchar are close to the latest number provided by one study.

All these people would have to change their health care under Medicare for All -- but they would be covered by the federal plan instead.

Former Housing and Urban Development Secretary Julián Castro claimed that a trio of states -- Ohio, Michigan and Pennsylvania -- have lost jobs of late, and businessman Andrew Yang claimed that Ohio in particular has lost a large number of manufacturing jobs over time.

Facts First: Castro is incorrect, while Yang's claim, taken on a long enough timeline, is accurate.

It's not true that Ohio, Michigan and Pennsylvania lost jobs in the most recent available jobs data, as Castro claimed.

Ohio, Michigan and Pennsylvania all added jobs in August, according to the Bureau of Labor Statistics . State-by-state data for September is not available yet.

According to the Bureau of Labor Statistics and the Bureau of Economic Analysis, total employment in Ohio's factories has actually risen nearly every year between 2010 and 2018, and reached its most recent peak in June 2019.

Yang: Countries that imposed taxes on the rich to pay for social programs later repealed them

Massachusetts Sen. Elizabeth Warren, who has proposed a vast expansion of the social safety net, outlined her plan to pay for her proposals with new taxes on personal assets -- drawing a sharp retort from businessman Andrew Yang, who claimed that many countries that have tried to impose wealth taxes eventually removed them.

"A wealth tax makes a lot of sense in principle," Yang said. "The problem is it's been tried in Germany, France, Denmark, Sweden and all those countries ended up repealing it because it had massive implementation problems and did not generate the revenue projected."

In 1990, 12 developed countries -- including Germany, France, Denmark, Sweden -- in the Organisation for Economic Co-operation and Development had net wealth taxes. But by 2017, only four countries levied such a tax, according to a 2018 OECD report. Since then, France repealed its tax, leaving only Norway, Spain and Switzerland.

Countries generally justified repealing these taxes because of concerns over their efficiency and over administering them, as well as "by the observation that net wealth taxes have frequently failed to meet their redistributive goals," according to the OECD . The revenue collected from them have been "very low," with only a few exceptions.

Amid a heated exchange between former Texas Rep. Beto O'Rourke and Mayor Pete Buttigieg of South Bend, Indiana, over gun policy, O'Rourke said that 40,000 Americans die annually due to gun violence. O'Rourke cited that statistic as he sought to defend his proposal for a mandatory buyback program for AK-47s and AR-15s.

Facts First: O'Rourke's is accurate but this statistic requires key context in order to understand the full picture.

While the Centers for Disease Control and Prevention says 39,773 people died from gun-related injuries in 2017 -- the most recent year for which data is available -- most of those deaths are suicides. Roughly six in 10 gun deaths in 2017 were suicides, and less than four in 10 gun deaths involved homicides.

The number of gun deaths that year reached the highest level since at least 1979, when record-keeping on firearm mortalities began.

The kinds of firearms O'Rourke has zeroed in on, semi-automatic rifles, have been utilized by mass shooters. However they're not used in the majority of murders. The vast majority of murders are committed with handguns, according to the FBI , and a relatively small number are committed with rifles -- the type of guns O'Rourke would target with his mandatory buyback program. In 2017, handguns were involved in 7,032 murders and rifles were used in 403 murders.

Sanders: Six banks have assets equivalent to half of US GDP

Vermont Senator Bernie Sanders claimed that six US banks "have assets equivalent to half of the GDP of the United States," while giving examples of "the grotesque level of income and wealth inequality" in the country.

Fact First: This is correct.

The largest banks by assets in the United States are JPMorgan, Bank of America, Citi, Wells Fargo, Goldman Sachs and Morgan Stanley. Together, their total assets amount to $10.6 trillion dollars in 2018, according to ratings agency Standard & Poor's .

California Sen. Kamala Harris resurfaced a previous claim that the eight biggest pharmaceutical and insurance companies alone made $72 billion in profits last year while Americans continue to suffer under the opioid crisis.

"The eight biggest pharmaceutical companies and insurance companies last year profited $72 billion on the backs of people like the families that we are talking about that have been overwhelmed by this crisis, which is a public health epidemic," said Harris. "And they knew what they were doing."

It's not the first time that Harris has made the argument. She lodged the complaint back in July while criticizing former Vice President Joe Biden's health care plan.

Facts First: While it was not clear which companies are part of Harris' tally, she's likely in the ballpark, at least according to profit data available for US drug companies as well as numbers on health insurance company profits from the National Association of Insurance Commissioners. However, some context is needed as these profits aren't derived solely from opioids or from the US market alone.

Ten of the largest US-based drug companies made $69 billion in profits last year. The health insurance industry made a total of $23 billion.

Not all of these profits came from the companies' operations in the United States.

A report from the National Association of Insurance Commissioners said the health insurance industry generated net earnings of $23.4 billion in 2018.

Steyer, Klobuchar and Yang's claims on the opioid epidemic

Several of the Democrats debating Tuesday night made shocking claims about the opioid epidemic in the US.

Minnesota Sen. Amy Klobuchar cited an employee of a pharmaceutical company comparing addictive pills to Doritos. Tech entrepreneur Andrew Yang asserted that at one point there were more prescriptions in the state of Ohio than people. And hedge fund founder Tom Steyer said that 72,000 Americans died from an opioid overdose last year.

Facts First: The devastation wrought by the drugs in communities across the country needs no exaggeration, and Klobuchar and Yang gave straight facts. But Steyer's number is wrong.

Steyer appears to have conflated the number of overdoses overall with opioid deaths. According to the latest Centers for Disease Control data , in 2017 (the latest year for which data is available), 70,000 people died after overdosing on drugs, including substances like meth, which is not considered an opioid. 47,600, or just over two-thirds of the total 2017 overdose deaths, were due to opioids, per the CDC.

Klobuchar's reference comes from an internal email sent by an employee of pharmaceutical giant Mallinckrodt, released this year as part of litigation in Ohio. (Klobuchar called the person a pharmaceutical executive, but CNN reporting is that the person was a sales representative.)

Facts First: Alabama's near-total ban on abortion would jail doctors who perform some abortions for up to 99 years.

Alabama's near-total ban -- the most restrictive abortion law in the country -- would punish doctors who perform the procedure with up to 99 years in prison and does not include exceptions for cases of rape and incest. The law does contain an exception for abortions that prevent a "serious health risk" to the mother of if the "unborn child has a lethal anomaly."

Alabama Republican Gov. Kay Ivey signed the bill into law in May, and a challenge to the law is currently pending before a federal judge. The law is slated to take effect in November.