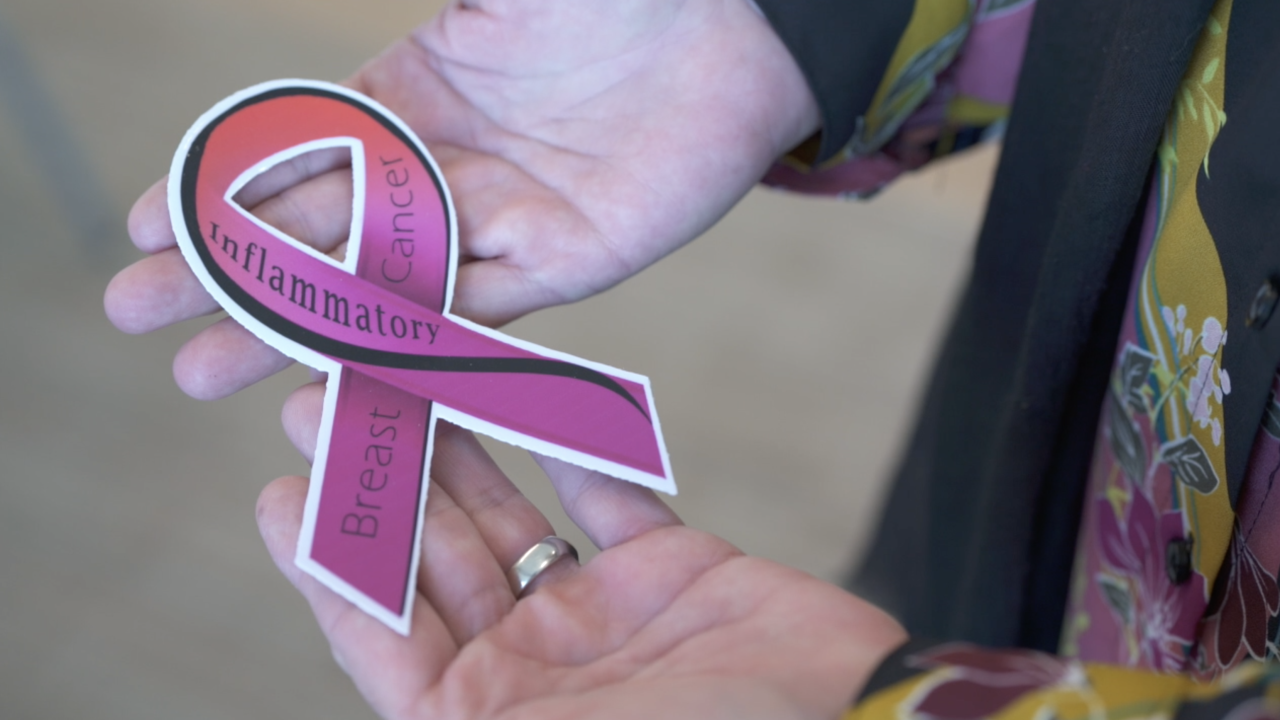 In recent years, healing and meditation has become an important part of Janea Escobedo’s life.

“It’s just very relaxing to be under the trees to watch the leaves, and hike around to see the wildlife. It’s, it’s very healing,” she says.

“In February of 2017, I was happy-go-lucky turned into a cancer patient with a very aggressive rare disease that I didn’t know what to do with,” she recalls.

Dr. Radhika Acharya, the medical director of the UCHealth Cancer Center in Highlands Ranch, Colorado, has been assisting Escobedo in her cancer journey.

“[Inflammatory breast cancer] makes up just about 0.2 to 0.5 percent of all breast cancers, so it’s very rare, and it involves the skin that overlies the breast,” Dr. Acharya says.

She says inflammatory breast cancer is so rare, it’s a challenging cancer to diagnose.

As uncommon as it may be, Escobedo knew the symptoms from a news segment she had seen years prior.

“Honestly didn’t feel sick, didn’t think anything was going on, but I had that itch,” Escobedo says.

She thought that itch was simply dry skin. However, after a couple weeks, it was still itchy so Escobedo decided to visit the doctor. An MRI showed nothing, but a biopsy proved it was inflammatory breast cancer.

“With inflammatory breast cancer, 9 times out of 10 there will be no lump,” Escobedo says.

The potential for a lump is just one symptom out of many for the disease. Other possible symptoms include itchiness, swelling of the breast, dimpling or thickening of the skin (like the skin of an orange), a discolored or inverted nipple, or the breast can get warm.

Considering it’s so difficult to discover, the cancer is often very advanced by the time it’s diagnosed. Escobedo says she had to go through super intense chemo, surgery and radiation. However, genetic testing helped guide doctors and Escobedo to make the right decisions for her body.

Oncologists say if you think you could be experiencing any of these symptoms, you should see your doctor right away.

“Be persistent, and don’t just sort of say ‘it will get better’. If it doesn’t get better, go see your doctor again,” Dr. Acharya says.

Escobedo will have to undergo chemo every three weeks for the rest of her life. Some days, she says she can barely drag herself down the stairs, but in the end, she chooses to stay positive and keep going.

“When I wake up in the morning and I’m alive, then I just need to live the day," Escobedo says. "And I have a strong faith in God, I have a very strong family bond, and I will be on chemo forever, but the good part is that forever may be much longer.”

If you’d like to reach out to the journalist for this story, please email elizabeth.ruiz@scripps.com