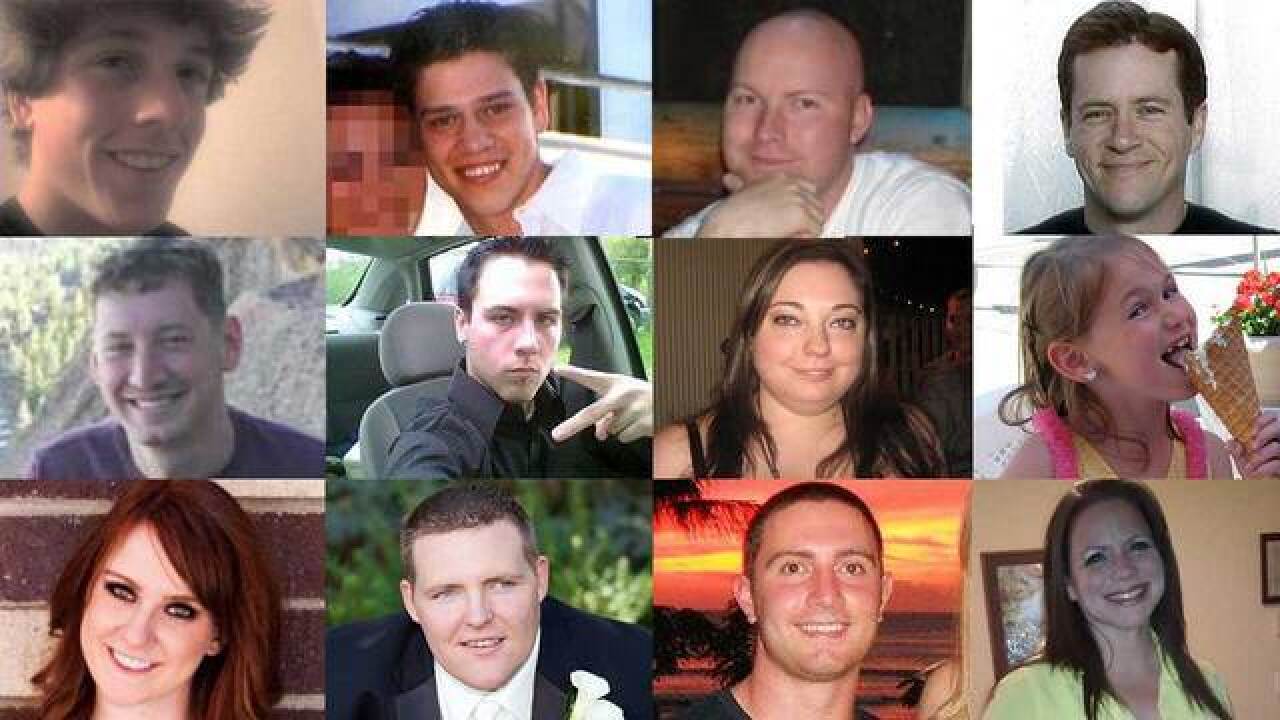 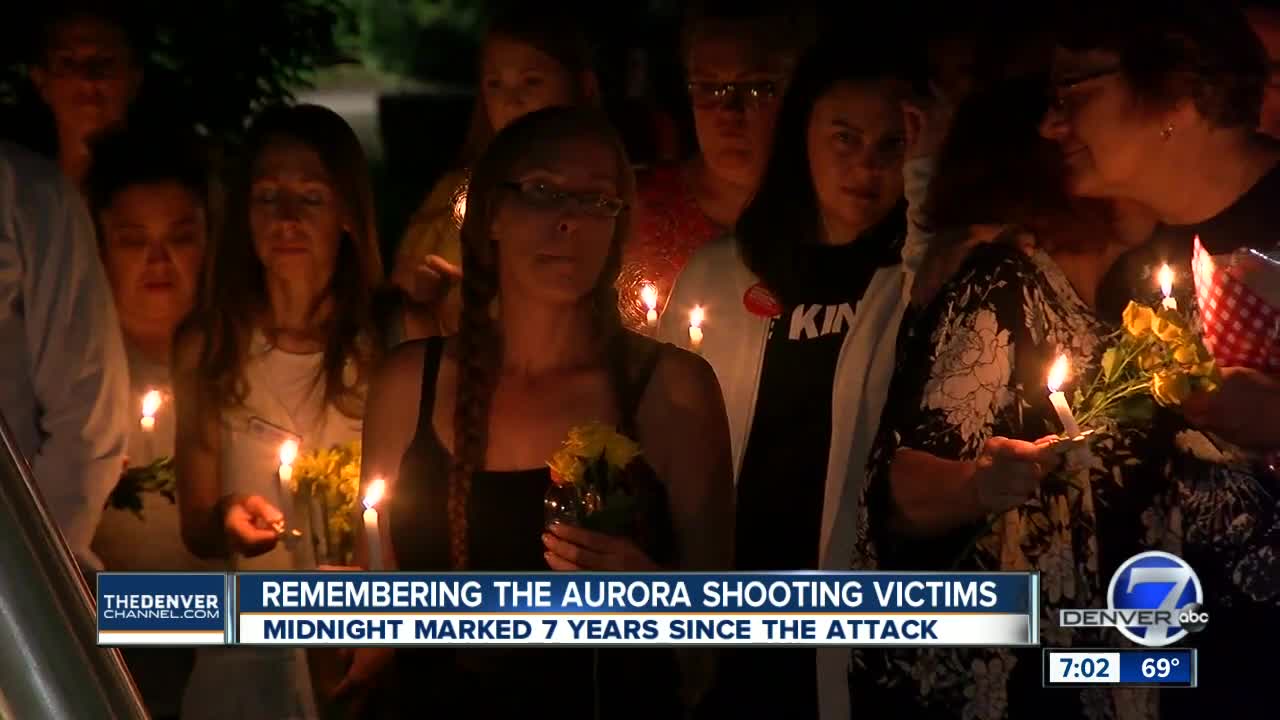 AURORA, Colo. – Saturday marks the seventh anniversary of the Aurora theater shooting , which took the lives of 12 people and injured 70 others just after midnight on July 20, 2012.

“As July 20th approaches, we acknowledge the wide range of emotions that all who have been affected by the Aurora theater shooting are experiencing,” the group wrote in a Facebook event announcing the ceremony. “We would be honored to have the community join us in solidarity with other family members and survivors of 7/20/12 at our annual remembrance that continues to be a source of healing.”

A candlelight vigil was held in the reflection garden, which was followed by a procession of first responders after midnight.

These are the lives lost we continue to remember today:

AJ (Alexander) Boik . AJ had just graduated from Gateway High School where he played baseball, said a family friend. Boik had planned on attending the Rocky Mountain College of Art and Design in the fall. His dream was to become an art teacher and open his own studio, his family said.

Jonathan Blunk . The father of two served three tours in the Persian Gulf and North Arabian Sea between 2004 and 2009, close friend James Gill of Brighton, Colo., told the Associated Press. He had high hopes for his future, with plans to re-enlist in the Navy and the goal of becoming a Navy SEAL. He died in the shooting after he pushed his girlfriend Jansen Young under the theater seat, saving her life.

Jesse Childress , 29, was a staff sergeant at Buckley Air Force Base and worked as a cybersystems operator. Friends said he spent nearly every day of the week playing sports -- softball on Mondays, bowling on Tuesdays, reported the Denver Post. Childress loved comics and superhero movies. He had recently bought a black Scion -- a car he nicknamed the "Batmobile."

Gordon Cowden loved life and his family. He went to the midnight movie premiere with his two teenage children. The father of four lived in Aurora, but was described as a "true Texas gentleman" in a family statement. He loved the outdoors and owned his own business. Cowden's teenage children escaped the shooting unharmed.

John Larimer was a Navy sailor based at Buckley Air Force Base, where he was a cryptologic technician — a job that the U.S. Navy says on its website should be filled by someone with "exceptionally good character, above-average writing and speaking skills, a good memory, curiosity and resourcefulness." Those who knew him described him in similar terms.

Micayla Medek , 23, was saving money for a trip to India. She was working at Subway and attended Aurora Community College. Her father, Greg Medek, told the Los Angeles Times that Micayla loved Hello Kitty, hot pink and Beanie Babies. At her funeral service, mourners wore pink ribbons, some with Hello Kitty faces on them, in honor of her fondness for the color and the character.

Matt McQuinn died trying to protect his girlfriend. As the gunman opened fire, McQuinn dove on top of Samantha Yowler. McQuinn's stepfather, David Jackson, told the Dayton Daily News that McQuinn was a hero. Yowler was injured in the leg, a family spokesman said. McQuinn, a 27-year-old Ohio native, had moved to Colorado just a few months earlier.

Jessica Ghawi was a journalist and blogger who also went by the name Jessica Redfield. Ghawi had recently moved to Denver from San Antonio, Texas, to pursue her dream of becoming a sportscaster. "She had a huge heart," Ghawi's mother, Sandy Phillips, said. "Cared deeply for other people." A few months earlier, Ghawi was visiting Toronto with her boyfriend, a minor league hockey player, when they narrowly escaped a deadly shooting in the city's main downtown mall.

Veronica Moser Sullivan, 6, went to see the Batman movie with her mother, Ashley Moser, 25. Veronica died from her injuries. Ashley was left in critical condition, with gunshot wounds to her neck and abdomen. She was paralyzed below the waist. "(Veronica was) a vibrant little girl ... just was bragging about learning how to swim on Tuesday," Annie Dalton, Ashley's aunt said.

Alex Sullivan was at the midnight showing of the new Batman movie as part of his birthday celebration. "#TheDarkKnightRises OMG COUNTING down till it start can't wait going to be the best birthday ever," Sullivan wrote on Facebook. His family called him "their real life super hero. Alex was smart, funny and above all loved dearly by his friends and family," the family statement said.

Alex Teves , 24, was originally from Arizona, but was living in the Denver area, after graduating from the University of Denver. Teves' father, Tom Teves, told ABC News that his son had blocked his girlfriend from a bullet when he was himself shot and killed. His father said Alex would do anything to save his girlfriend.

Rebecca Ann Wingo , 32, was a devoted mother, who always sat on the front row at church. Shannon Dominguez, who worked with Wingo on weekends, said she was friendly with everyone and always seemed to be in a good mood."She had a really bubbly personality," Dominguez said. "She was a pretty happy person. She just never really seemed ... like with work, she never got irritated. She was pretty happy to be here."

The gunman is serving life in prison.

This story was originally published on KMGH .