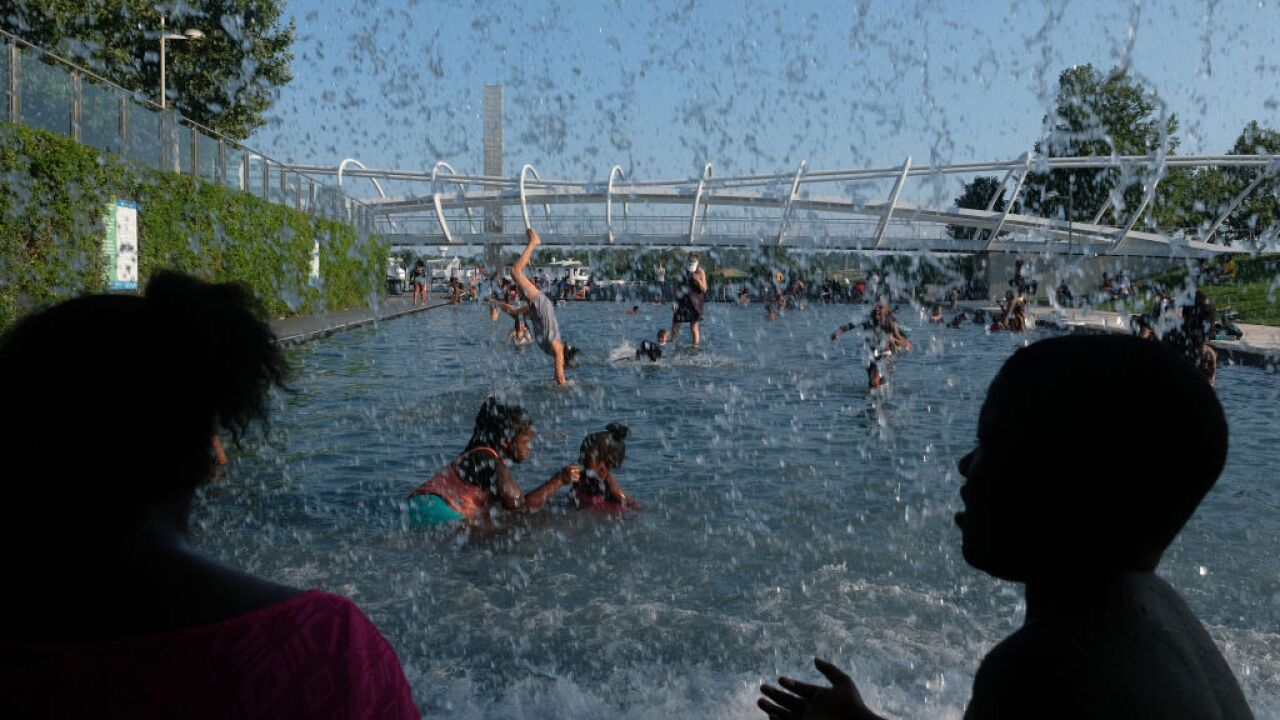 The brutal heat wave that engulfed more than half of the country, left tens of thousands without power and resulted in two deaths is finally coming to an end.

People in the Midwest and Northeast should wake up to cooler temperatures Monday morning, according to CNN Meteorologist Michael Guy.

That's because a cold front from Canada has traveled south, bringing with it some rain and a lot of much needed relief for overheated cities, many of which were under excessive heat watches over the weekend.

Guy said that those in Washington DC and Philadelphia could still see temperatures in the 90's, but things should cool down by midweek.

Some states in the Midwest such as Iowa and Illinois have already seen this cold front and lower temperatures as a result of cooler, drier air that's come down from our neighbors to the north.

But even with a cold front the thermometer won't drop that much.

The front is only expected to bring temperatures down into the mid-80's in the Midwest and Northeast, which is a normal range for this time of year, Guy said.

Oddly enough, there are other parts of the United States that haven't experienced the above average heat that has plagued most of the country but are, instead, reporting record lows.

"While the East Coast was baking, parts of Montana hit in the upper 30's," Guy said, noting that on Sunday morning parts of Montana registered a record low for the day, reaching only 38 degrees Fahrenheit.

About 195.7 million people were under an excessive heat watch or warning or a heat advisory Friday, according to the National Weather Service with alerts stretching from New Mexico to Maine.

Record-breaking highs were recorded in at least four cities, including El Paso, Texas, which topped out at a boiling 106 degrees Fahrenheit, and Atlantic City, which saw 100 degrees.

Buchanan tells CNN his department responded to 64 heat-related calls since the heat wave began on Thursday.

Boston, New York and Philadelphia were just a few of the other cities on the East Coast that were under excessive heat warnings as of Friday.

New York Mayor Bill De Blasio even issued an emergency declaration because of the intense heat that threatened its nearly 20 million residents.

But rolling power outages in the boroughs left some in Brooklyn, the Bronx and parts of Queens without any refuge from the blistering heat Sunday night.

At its peak ConEdison reported a total of 53,000 customers without power across New York City prompting New York Gov. Andrew Cuomo to deploy hundreds of State Police, generators and light towers to assist. He encouraged New Yorkers to check on their elderly neighbors.

Extreme heat also resulted in the cancellation of the New York City Triathalon on Sunday because the organization felt it was unsafe for athletes and spectators alike.

High heat index in the Midwest

Sweltering temperatures led to several cities issuing heat advisories and opening up cooling centers to try to protect the most vulnerable communities.

Officials in Detroit opened cooling centers and had members of the Police Department check on homeless people and offer them a ride to the centers.

In other parts of the Midwest, several communities experienced soaring heat indexes. Madison, Wisconsin, for example, reached 93 degrees but had a heat index of 109 on Friday.

Heat index or "apparent temperature" is a combination of air temperature and humidity which measures what the body actually feels when it's outside, according to CNN Meteorologist Haley Brink

"We should pay attention because of the way we, as humans, cool down," she said. "We cool down by sweating, and that sweat evaporates off of our bodies, in turn decreasing our body temperature.

"When it is really humid outside, the rate of sweating decreases, so it actually feels warmer outside than it is," Brink said.

These record high temperatures are to blame for at least two deaths in recent days.

Mitch Petrus, a former NFL lineman for the New York Giants, died from heatstroke at the age of 32 on Thursday.

The former Super Bowl champion was working outside at his parents' shop in Lonoke County, Arkansas, where the temperature reached 92 degrees and a heat advisory was in effect, according to Pulaski County Coroner Gerone Hobbs.

Petrus' mother told the coroner that her son had been drinking water while working outside but did not get enough electrolytes. Petrus did not appear to have any pre-existing conditions, Hobbs said.

A woman hiking on a Maryland trail in the Washington DC suburbs died Saturday from what authorities believe was a heat-related emergency, Pete Piringer, a spokesman for Montgomery County Fire and Rescue Services, told CNN.

Earlier this week Maryland officials announced four heat-related deaths between the July 3 and 15 but these were unrelated to the current heat wave.