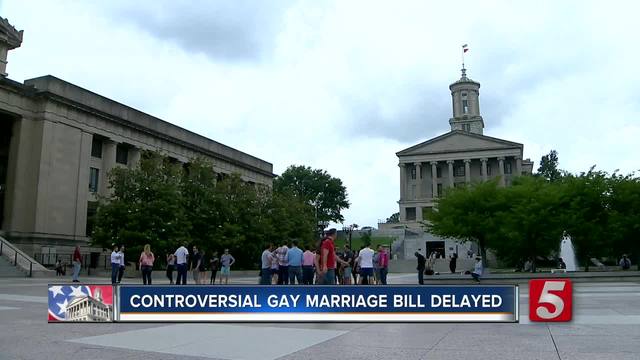 Same-sex marriage advocates won a small victory when a bill recognizing only marriages between one man and one woman was rolled in legislature.

Same-sex marriage advocates won a small victory when a bill recognizing only marriages between one man and one woman was rolled in legislature.

"I think there is still a lot of unease among legislators about marriage equality so I think that's why we're seeing this," on activist said.

The bill would essentially allow policy of the state to defense marriage between one man and one woman regardless of any court decision to the contrary.

As you can imagine it would put the state directly at odds with the 2015 U.S. Supreme that recognized same-sex marriage across the nation. It was introduced and rolled last year by Mark Pody, a Republican from Lebanon.

He is now in the State Senate; so Majority whip Ryan Williams ended up with this bill, which is part of the reason why it was rolled but it could come back later this session.

Same-sex marriage advocates still saw it as a victory though - including Chris Modisher who's been married to her wife for five years.

"It would gut the rights that we now have as a married couple, it would effect our marriage under state law and federal law," Modisher said.

If the "Natual Marriage Defense Act" passed, the state could end up forfeiting up to eight point five billion dollars if passed due to loss of federal funding. No word on when or if this bill comes back.

Also worth noting today that a bill which would mandate students use the bathroom of the sex assigned on their birth certificate was pulled from the House floor.