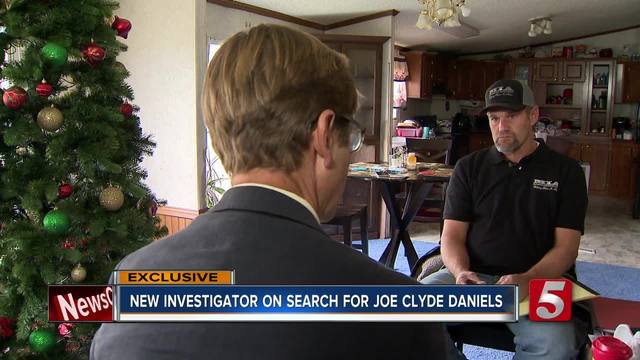 A new investigator has taken the mysterious case of little Joe Clyde in Dickson County.

A new investigator has taken the mysterious case of little Joe Clyde in Dickson County.

David Marshburn has solved some high-profile cases across the country. He arrived in Dickson County this morning to begin working to Joe Clyde case.

You may recognize the name Marshburn. He was instrumental in solving the high-profile cases of missing U.S. Army Specialist Kelli Brodeaux in North Carolina and 5-year-old Lucas Hernandez in Kansas. Now, he's turning his attention to Dickson County.

The founder of the non-profit SearchForMeFoundation hopes to succeed where other efforts so far have failed.

"Our main focus is finding where he is at ... his remains or if he's alive we find him alive," said Marshburn. He is a bounty hunter or so-called "fugitive recovery agent" with a reputation for finding the missing.

He's followed the Joe Clyde case since the child disappeared from his Dickson home back in April.

So why has Marshburn come from his home in North Carolina now?

"Everything is kind of quiet. That's the best time we work when everything else fails. We'll come in and we think outside the box and try to do our thing," said Marshburn, who will talk with friends and family of Daniels.

"I do a lot of profiling," said Marshburn.

He also hopes, if it can be arranged, to meet with both the father Joseph and the mother Krystal. Marshburns said his unorthodox style is to get inside the heads of the accused.

"I just put myself in the position of the persons of interest and decide what I would do in that situation being them," said Marshburn.

Will that lead to Joe Clyde? Time will tell, but the child's grandmother Belle Daniels hopes so.

"When I heard he was coming I thought maybe we'll get some answers now."

One thing about Marshburn -- he likes to work alone.

He's in Dickson County now working the case, but so far has not yet reached out to law enforcement. Marshburn expects to be here for about a week.

He plans to attend the court hearing Tuesday in Dickson County as Joseph Daniels seeks a change of venue for his trial which is set for next spring.