Whether it was always her intention to get here, we may never know. We will never know what could've been, but we do know now the ways in which Megan Barry's career will be defined.

Whether it was always her intention to get here, we may never know. We will never know what could've been, but we do know now the ways in which Megan Barry's career will be defined.

Before she resigned. Before her affair. Nashville watched – often in awe – as Megan Barry, political star in the Democratic party, was born.

In September of 2007 Barry won her first election. She filled one of five at large council seats on the Metro City Council.

From there, she seemed to hit the ground running. In 2009, she pushed hard for a resolution that would prevent Metro from discriminating against employees based on their sexual orientation or sexual identity.

By a slim vote, the measure passed in September of 2009.

She was always seen as a champion of the LGBT community in Nashville. Her resignation will perhaps hit hardest there.

She would spend two terms on the Metro Council. After winning reelection in 2011, Barry seemingly omnipresent – making appearance at every major community event.

Her successful rise to the Mayor's office, began here.

The 2015 Mayoral Election was like none other in the city's history: six candidates, all vying for the same seat.

By the time the August 2015 primary was over, it was Megan Barry left standing against her political foe, David Fox. On election day, the race had become so heated that Barry and Fox wouldn't acknowledge one another.

It was the most expensive mayoral campaign the city had seen. At the end of a grueling election day, it would be Megan Barry would make history – becoming the city's first female mayor, with 55 percent of the vote.

At the time, we did not know that the man who would become her bodyguard, Sgt. Rob Forrest, would also become the man with whom she would have an affair.

The glimmer of that night quickly wore off. Taking the reins of the "It" city came with challenges. There would be a public spat over funding a new jail; the constant concern of keeping Metro General funded; and then the violence.

Nashville surpassed 100 homicides by the end of 2017, and the city was asking Barry what she was doing to fix it.

"As the Mayor of this city I absolutely feel a personal responsibilty for the safety of our citizens. This weighs on my mind everyday."

Max Barry was Megan and Bruce's only son. He died in a room in Denver after overdosing on Xanax, marijuana and opioids. Hundreds came to pay their respects. 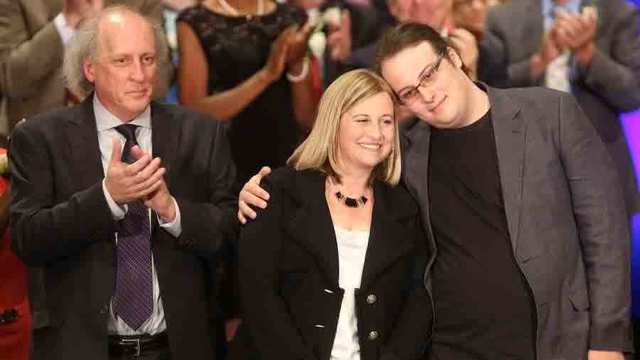 As a city, our hearts collectively broke as we watched Megan Barry, the mother, deal a kind of pain no parents should ever have to experience.

We watched as she left Max's memorial, thanking every police officer she encountered. We did not know then that the man standing beside her, would bring down her career.

But there were victories, as well. The biggest of which, will be one which lives on beyond this scandal: a massive, multi-billion dollar transit plan, which includes light rail and even a tunnel under the city.

Mayor Barry successfully convinced city council members to push forward with a resolution, which would ask voters to approve funding for the plan with a tax increase.

During her three years in office, there were also incredible highs.

When the Nashville Predators went to the Stanley Cup, she was there. When a gunman opened fire on a church in Antioch, killing a young mother, she was also there.

But through all the ups and downs, it would be her own shortcomings that would cut her career short.

The affair. The taxpayer dollars. The headlines. The distraction it all created, in the end would be too much for her to survive.

Whether it was always her intention to get to this office all along, we may never know. But we do know now this office, is no longer Megan Barry's.