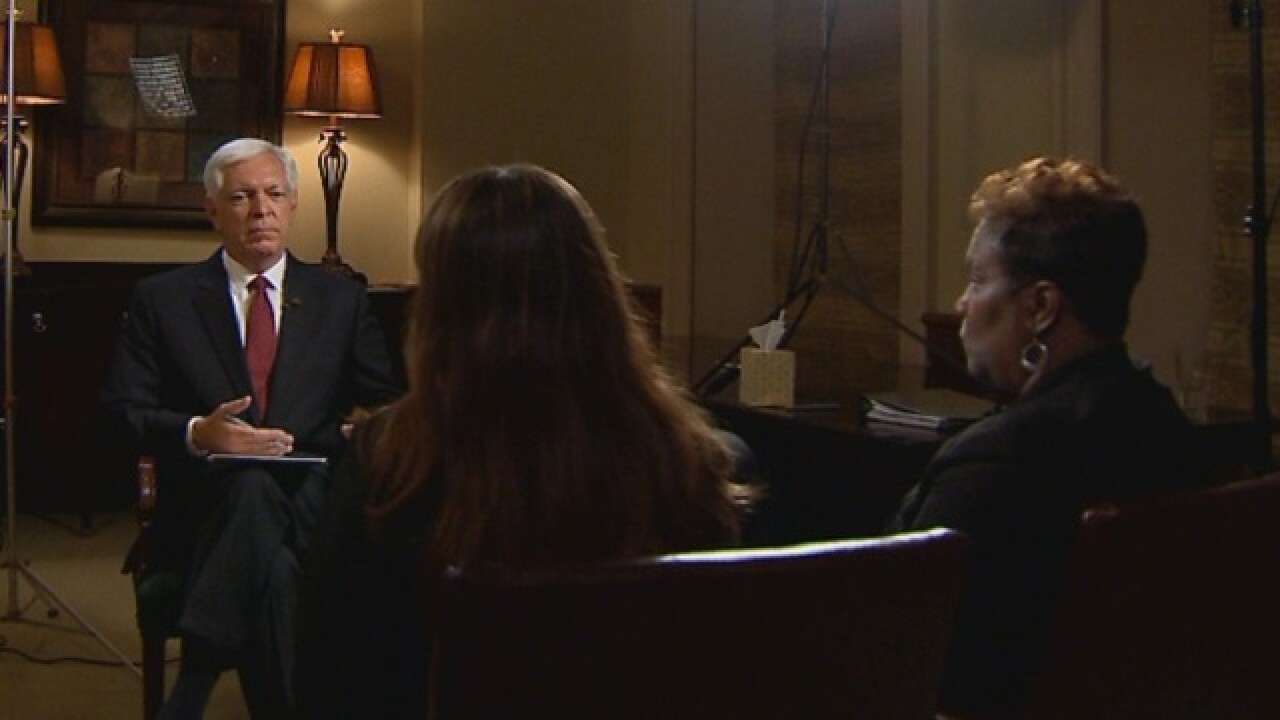 This timeline details NewsChannel 5's investigation of the testing and grading practices of Metro Schools as it unfolded.

For the first time, two educators are going public with their concerns -- and others, who did not want to go on camera, are telling similar stories to NewsChannel 5 Investigates.

This comes a day after the women went public with their concerns about testing procedures inside some Nashville high schools.

A policy developed by Metro Nashville Public Schools, supposedly to help students, may also help bureaucrats to mask the real problems in those schools.

A struggling Nashville high school, under pressure to improve graduation rates, made up its own rules as it tried to help get students out the door. Also included: allegations that AP students "paid for an A, basically" and that an administrator helped a student cheat.

If there's a problem, we'll get to the bottom of it. That was the message from Metro Schools officials.

A former Teacher of the Year says she was ordered to change failing grades to passing as one Nashville high school faced pressures to improve graduation rates. (Includes audio recording.)

A NewsChannel 5 investigation of Metro Schools now has state lawmakers demanding answers. And they're offering whistleblower protection to any school employees who come forward.

The Tennessee Department of Education has now opened a review to find out if some of Metro Nashville's struggling high schools may have gamed the system to make their test scores look better.

A class-action lawsuit filed against Metro Schools claims students were pulled from classes that they needed to graduate just to boost the schools' test scores.

Now, for the first time, one student is telling her story. It's a story that raises even more questions about whether some struggling schools put scores above students.

Another former Metro Schools teacher is raising questions about testing practices inside one Nashville high school -- practices that, she says, appear to have been designed to manipulate test scores.

NewsChannel 5 has uncovered new questions about how state-mandated ACT college admissions tests are administered by Metro Schools. Among the questions: who's really taking the tests?

Schools officials insisted that they've found no evidence of "gamesmanship," but they refused to answer specific questions about the district's testing practices.

Nashville's Chamber of Commerce is sounding the alarm over how Metro Schools are preparing students for college. But even the Chamber may not have the full story.

After two months of controversy, members of Metro's school board are now calling for an independent review of the district's testing and grading practices.

A group of Metro Schools whistleblowers now face an internal investigation after they raised questions about the district's testing practices.

An attorney for a Nashville high school principal at the center of a testing and grading controversy has warned Metro Schools that she's prepared to sue over the district's failure to defend her -- or if the district takes any disciplinary action against her.

Now, yet another family fears their student may have been a victim of questionable testing and grading practices inside a struggling Nashville high school.

Three Metro Schools whistleblowers have been reprimanded for improperly accessing and using student data as they sought to expose questionable testing and grading practices.

If you feel you've been wronged. you have the right to sue -- that is unless you're a student suing Metro Schools. Metro lawyers now say a student at the center of a school testing controversy has no right to sue.

A Davidson County chancellor has dismissed a class-action lawsuit filed by a Metro Schools student who claims she was pulled from a class to help manipulate her school's test scores.

Metro Schools officials falsely reported to the U.S. Department of Education that two whistleblowers provided NewsChannel 5 with confidential student information that appeared in a report that aired last November.

But that internal review did uncover suspicious patterns -- what the school system called "outliers" -- at one Nashville high school. And it found policies that need to be revised.

A prominent Metro Schools principal has slammed an internal review of the district's testing practices, calling it "inaccurate" and "misleading."

Have some Metro students been suspended -- kicked out of school -- for petty offenses? An internal e-mail, suggests that principals change discipline data -- so federal investigators don't start asking that question.

Critics called it "gaming the system." But, in a just-released report, the Tennessee Department of Education says there were no rules prohibiting the testing games played by some Metro Schools.

Did Metro Schools deprive a young student of her education - just to boost her school's test scores? That question - first raised by NewsChannel 5 Investigates - has now made its way to the Tennessee Court of Appeals.

July 14, 2016: State Board Of Education Approves New Rules For Testing

Sweeping new rules have now been approved as a result of a News Channel 5 investigation of Metro Schools. The rules limit how high schools across the state can use so-called "credit recovery" programs to let students earn credit on a computer.

A primetime special takes a look back at NewsChannel 5's investigation of the controversial testing and grading practices inside some Metro Nashville schools.

The Tennessee Education Association has joined in a lawsuit  filed by a former Metro Schools student over the district's testing practices.

Do students really need teachers to get an education? That provocative question was at the heart of arguments Tuesday before the Tennessee Court of Appeals as it heard one student's lawsuit against Metro Schools.

A Metro Schools student has lost her legal appeal. The Tennessee Court of Appeals ruled that being excluded from a particular class is not a violation of a student's constitutional rights.

That investigation, "Making the Grade," received a first-place award for public service in the annual contest that honors the best journalism in newspapers, photography, radio, television and online.