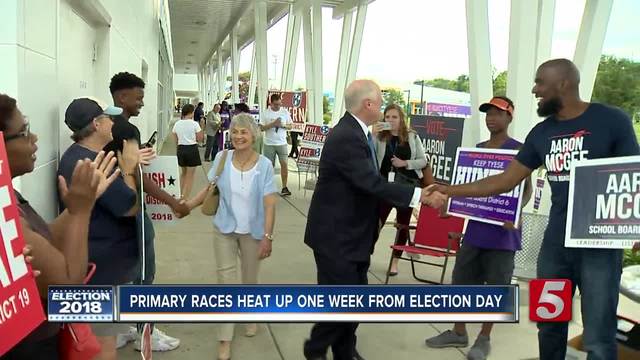 With the state primary race one week away, there is still no clear front runner in the crowded race to become Tennessee's next governor.

With the state primary race one week away, there is still no clear front runner in the crowded race to become Tennessee's next governor.

Bill Lee, Randy Boyd, Beth Harwell and Diane Black are all vying for the state's highest office but all have struggled to stand out in the crowded field. And that has left Republicans struggling as well.

"I think Republicans are struggling with and against their own party because their party has split, President Trump has created a big split there," says Lipscomb University political science Professor Marc Schwerdt.

Schwerdt says all of the candidates share a lot of common ground but have very distinct personalities.

"It's hard to see who is the leader, it will come down to that last day and who shows up at the polls," he added.

A recent poll put Bill Lee at the top of the pack, but at least one campaigned called the poll "fake."

Early voting is currently underway with the primary scheduled for Thursday, August 2nd.