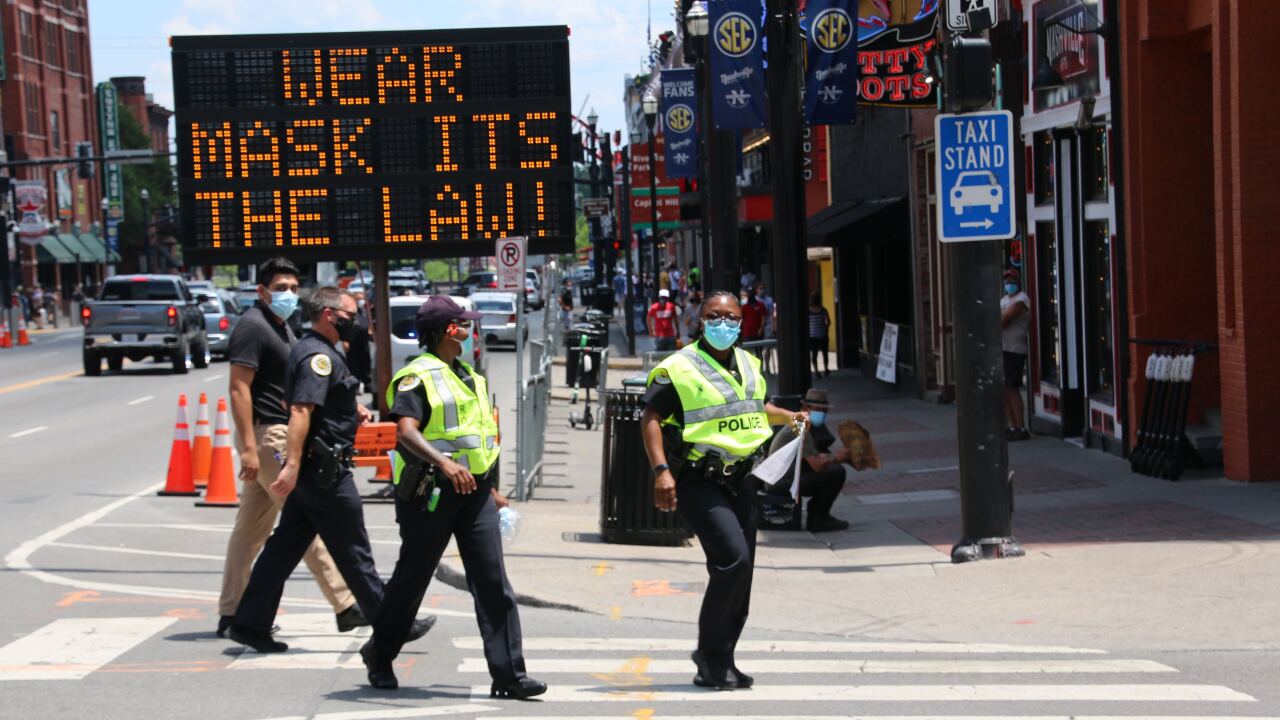 NASHVILLE, Tenn. (WTVF) — The Metro Nashville Police Department announced changes to its enforcement in downtown Nashville of the city's mask mandate in hopes of slowing the spread of COVID-19.

Department officials announced Wednesday that it will increase the number of officers on Broadway Friday and Saturday nights. The officers have been ordered to issue citations to people who aren't wearing masks.

MNPD enforcement was announced in mid-July. It began with an education phase in which ended July 3. During that time officers handed out pamphlets about the mandate. Officials said in a press release active enforcement began July 15.

Metro officers and teams of School Resource Officers (SROs) were assigned to Broadway and anyone "failing to comply with the mandatory mask order will be subject to a Metropolitan Government civil citation, which, upon adjudication by a General Sessions judge, could result in a $50 fine."

Our officers on Broadway working to encourage compliance with the mask order have been joined tonight by @NashvilleHealth Director Dr. Michael Caldwell & staff. Masks are being distributed to those without. Thru 5 p.m., officers have given 14,299 verbal mask warnings since 7/15. pic.twitter.com/GG2bVfIS14

Multiple businesses have been cited in the downtown area and officers have given thousands of verbal warnings, but no citations have been issued to individuals. However, during a special-called meeting Wednesday, city and police officials said that will change.

MNPD officials said 30 officers will be divided into three teams of eight who will conduct walking patrols on Broadway from 3:30 p.m. until midnight. The remaining six officers will be on ATVs and conduct mobile enforcement, including stopping and citing any “transpotainment” vehicles operating in violation of the Health Department’s prohibition.

Those 30 officers will be in addition to the SRO teams already on Broadway.

Officers will be joined by staff from the Metro Health Department, Transportation Licensing Commission, Beer Board and the Fire Marshal’s Office on Friday and Saturday. The Sheriff’s Office will base its mobile booking vehicle in Riverfront Park on both nights.

Under state law, violation of the Health Department’s mask order is a class C misdemeanor. Officials said officers have been directed to take all necessary steps to ensure compliance as Nashville works to lessen the spread of COVID-19.